A team of researchers at Pennsylvania State University has developed a microscale pump that turns on in the presence of a particular chemical, with a flow rate that depends on that chemical’s concentration. Because of its specificity for a specific analyte, the pump doubles as a chemical sensor - a useful combination for diagnostic devices. 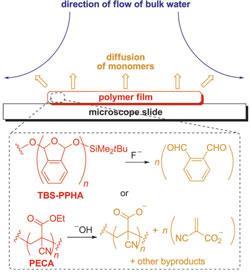 The pump is a polymer film whose constituent molecules break down upon reacting with an analyte in an aqueous solution. The resulting concentration of monomers near the film causes water to flow toward it. The water then runs outward along the film’s surface, carrying monomers and other particles with it.

The team made two versions of their pump: one with tert-butyldimethylsilyl (TBS) end-capped poly(phthalaldehyde) (TBS-PPHA), which reacts to fluoride, and the other with poly(ethyl cyanoacrylate) (PECA), which responds to high pH. TBS-PPHA chains, which can be as long as 1000 monomers, break down completely when the fluoride cleaves the TBS end-cap. While PECA’s depolymerisation is more complex, it better lends itself to medical applications because it is non-toxic and non-immunogenic in humans. The explosive release of monomers is one of the pump’s main attributes, says author Scott Phillips: ’Depolymerisation offers a highly amplified sensor response’.

The team measured pump speeds by observing polystyrene tracer particles. With a NaF concentration of 0.1M, the TBS-PPHA pump pushed the fluid at a top speed of about 1.15?m/s while the PECA pump managed 11?m/s with 1M OH-. Both pumps cleared the polystyrene beads from their vicinities.

According to Ramin Golestanian of Oxford University, UK, the most novel and exciting aspect is the combination of sensing and pumping, which allows mechanical action ’to be switched on with a chemical signal’.

In order to demonstrate the pump’s potential in microfluidic devices, the team used the TBS-PPHA film to pump particles on a millimetre scale and around corners. They also used a reagent that releases fluoride ions upon reacting with beta-D-glucuronidase, a marker of Escherichia coli, to turn the pump into an E coli detector.

With this sensing ability, Phillips says that the pump could check water quality or diagnose medical conditions such as bacterial infections. The team is also interested in exploring the pump as a self-cleaning surface, pushing bacteria away as it did with the polystyrene beads. Co-author Ayusman Sen suggests that drug delivery could be its most important application, with the drug embedded in the polymer film and released on exposure to a disease biomarker.