To chew or to burn?

Preview: Figuring out the best - and cheapest - ways of unlocking the energy stored in the cellulose, lignin and hemicellulose bound up in plant waste.

There’s a positive buzz of research and bold investment surrounding second generation biofuels. Turning woodchip, prairie grasses, corn stover and general biomass waste into fuel to drive our cars ticks all the energy boxes. It reduces dependence on imported oil, cuts carbon emissions from fossil fuels, and crucially doesn’t deplete valuable food resources. Yet while politicians get excited and companies try to lower engineering costs for commercial development, scientists are still asking which are the best - and cheapest - ways of unlocking the energy stored in the cellulose, lignin and hemicellulose bound up in plant waste. 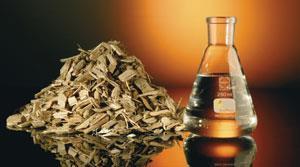 Woodchips and other plant waste can be turned into fuels

Burning the lot is one option, producing heat and electricity. But cars don’t traditionally run on electricity. Lignocellulosic biomass has to be converted to liquid fuel to make inroads on petrol and take advantage of that industry’s existing infrastructure.

In the familiar biochemical route, adapted from the mature US grain fermentation industry, chemicals and enzymes break up tough lignocellulose into sugars which are then fermented, usually to ethanol. There is another option: adapting thermochemical processes, first developed for coal, to biomass. High temperatures and pressures convert lignocellulose to carbon monoxide and hydrogen (syngas), which is transformed via the Fischer-Tropsch reaction into methanol, ethanol, or diesel, or kept as hydrogen. Variations on these themes range from pyrolysing biomass into liquid oils, to producing biobutanol.

"I get tired of claims that one costs more than another, when no-one can point to a meaningful comparative study" - Robert Brown, Iowa State University, US

Which is best? A new meta-analysis has concluded that the current costs of biochemical and thermochemical ways of turning waste biomass into liquid fuels are surprisingly similar. Only combining the two can make cellulosic biofuels economically competitive, say researchers. At first glance it’s not obvious which options have most to offer. ’I get tired of claims that one costs more than another - when no-one can point to a meaningful comparative study,’ Robert Brown, who works on renewable fuels at Iowa State University, US, told Chemistry World. Thermochemical and biochemical routes have different optimum plant sizes, feedstock costs, byproducts (which may add value), output fuels, and relationships to existing industry: so working out the resources each uses to produce the equivalent of a gallon of petrol is not easy.

Brown presented his own comparative analysis at a June biofuels conference in Ghent, Belgium. His conclusions may surprise bug-lovers: using current technology, a gallon of petrol equivalent costs about the same ($1.78) to produce from an enzyme-run cellulosic plant as from a Fischer-Tropsch gasification plant of the same size. (Unfortunately, commercial scale cellulose plants are all extremely expensive to build compared to their grain ethanol predecessors.)

Bugs can chew as much as they like - and their access is aided by expensive pre-treatment of tough polymers - but currently they simply can’t convert as much carbon to liquid fuel as hi-tech stoves that turn all plant waste, including indigestible lignin, into a gas. Of the energy stored in lignocellulose, only 38 per cent gets translated into liquid fuel by today’s purely biochemical routes, Brown estimates. That figure may improve, but thermochemical routes already hit efficiencies of 45-50 per cent. ’I believe there’s recent recognition that the thermochemical approach can be at least as good as the biochemical route in the transition from grain ethanol to cellulosic biofuels in the US,’ says Brown.

"I have all but given up on cellulosic ethanol" - David Bransby, Auburn University, US

Other researchers think he’s understating the case. ’I have all but given up on cellulosic ethanol, and am looking much more optimistically at cellulosic diesel,’ commented David Bransby, who works on energy crops at Auburn University, US. One company that agrees with him is Choren, which with Shell is opening a commercial scale (15 000 tonnes per year) cellulosic Fischer-Tropsch plant in Freiberg, Germany, at the end of 2007.

Combining bugs and burners together to attack biomass is the best option, says Lee Lynd, of Dartmouth University, US: for example, fermenting as much biomass as possible, then gasifying the lignin left over. Indeed, he points out, this joint approach is assumed by most biochemical proposals for making ethanol from cellulosic biomass. Brown suggests putting the bugs in last: fermenting the syngas which has been created from biomass waste, so bypassing the problems of expensive pre-treatment and wasted biomass. US firms BRI Energy and Coskata hope to make this vision a commercial reality.

With research breakthroughs, the picture could change rapidly. Lynd is working on microbes which can ferment ethanol directly from pre-treated cellulose. ’Projected mature biomass technology featuring fermentation has liquid fuels yields of 70 per cent,’ he says. On the thermochemical side, Paul O’Connor, of BIOeCON, says his company has developed a catalyst system which converts biomass directly to oils, at lower temperatures and with more simple apparatus than required for gasification. Such catalytic cracking or depolymerisation, as it’s known, should be less expensive than the Fischer-Tropsch process. Promising also are chemical ways of turning sugars into higher energy liquid fuels (see page 23) - if they can be adapted to work on cellulosic biomass at commercial scales.
For now, the main lesson from Brown’s analysis may be that talking to the other side can result in benefits for all. ’People do thermochemical routes at one set of meetings, and biochemical at another,’ he says. ’It’s rare to find someone with interest and expertise in both areas.’