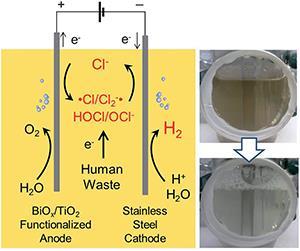 An electrolysis cell that couples energy storage with water purification and reuse has been developed as part of a wider project to make a self-sustaining toilet.

Electrochemical approaches to water purification are not unknown but often focus on wastewater in industrially developed areas. Michael Hoffmann, and colleagues at the California Institute of Technology in the US, hope their electrochemical water splitting method for purifying human waste, at the same time as generating hydrogen gas, will eventually be introduced into areas with underdeveloped infrastructure.

Hoffmann says the inspiration for the work stemmed from their research into solar fuel production. ‘It did not make sense to simply discharge the oxygen generated during water splitting. We wanted to use the reactive oxygen species generated to oxidise organic chemical contaminates in wastewater.’

A bismuth-doped titanium dioxide electrode is central to the electrochemical reaction. In addition to hydrogen, the reaction also produces a series of reactive oxygen species. These reactive oxygen species react with chloride ions in urine to generate reactive chlorine species that disinfect the wastewater by killing any bacteria or viruses present in it, to leave water that is suitable for toilet flushing or crop irrigation.

Effluent gases – primarily hydrogen and nitrogen – produced by the electrochemical cell are run through a high temperature solid state fuel cell via a proton transfer membrane. These react with water vapour and oxygen at around 200 °C to produce an electrical current, which can be stored in batteries and the exothermic reaction is used maintain the temperature needed for this reaction.

Diogo Santos, an electrochemical water splitting expert at the University of Lisbon in Portugal says the study ‘brings important advances to the use of electrochemical treatment for the conversion of waste to energy in a simple and low-cost way.’

Hoffmann and his team are working with the Bill and Melinda Gates Foundation and the Koehler Company to create a working prototype of their toilet system.