Plant geneticists have identified a gene in wild tomatoes that would have made the fruit taste of cucumbers. The gene appears to have been inactivated as the plant was domesticated, they say. The discovery was made when studying a plant hybrid produced by breeding a modern, cultivated tomato with one of its wild ancestors.

The tomato flavour we have grown to expect is associated with six-carbon (C6) aldehydes, explained Kenji Matsui, professor of biological chemistry at Yamaguchi University, Japan. Volatile C6 compounds, such as n-hexanal and n-hexan-1-ol, are considered the most important.

Conversely, cucumbers have C9 compounds to thank for their distinctive flavour. When C9 compounds are found in foods other than cucumbers and melons (both members of the cucurbit family) they are regarded as stale or ’off’ flavours. 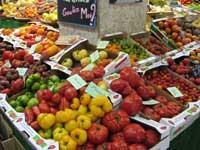 Cultivated tomatoes through the ages

In cultivated tomatoes, an enzyme called fatty acid 13-hydroperoxide lyase (13 HPL) forms the flavoursome C6 aldehydes. The equivalent lyase in cucumbers, however, is able to form both C6 and C9 flavour compounds. This enzyme, dubbed 9/13 HPL, was not known in tomatoes - until now.

After Matsui’s team crossed a cultivated tomato with a wild strain, they found that the hybrid does indeed carry a gene that encodes 9/13HPL. Since this would have allowed the wild tomato to produce a healthy dose of C9 compounds, it may have taken on a distinctly cucumber-like flavour, they suggest.

The research is part of a wider effort to identify new food traits that might tempt consumers. Since there is only a very small fraction of wild genetic variation still present in cultivated crops, breeding domesticated varieties with wild strains is one of the best ways to introduce new traits, such as different colours or flavours.

But Matsui certainly isn’t aiming to breed this particular long-lost trait back into tomatoes - it tastes nice in cucumbers, but horrible in tomatoes.

’Nonetheless, this finding could emphasize that wild or classic varieties of modern crops are an important resource for novel traits,’ he told Chemistry World.

The findings aren’t a huge surprise for Roger Chetelat, director of the C M Rick Tomato Genetics Resource Center (TGRC) at the University of California, Davis, US. The TGRC supplies seed stock to researchers worldwide, including Matsui’s team.

Fruits of the wild tomato species Solanum pennellii, which was included in the hybrid used by Matsui, are known to have a ’soapy . untomato-like’ odour, said Chetelat. ’It makes sense to me that they would share something with cucumbers, at a biochemical level,’ he said, ’though the fruits of the pennellii are foul and sticky, not nearly as appetising as a cuke.’

Chetelat knows of no examples of S. pennellii having been used for food in the past. ’S. pennellii is considered by taxonomists to be the most distant wild cousin of the cultivated tomato,’ he said. ’I think it’s stretching the results to say that this cucumber volatile was lost as a result of domestication.’ The closest known wild relatives of the modern tomato are quite tasty, he added, so the cucumber volatile might have been lost previously, perhaps by evolution in the absence of farmers.

Still, while nobody wants to make tomatoes taste horrible, knowing how to avoid making them taste like that could be important, Chetelat added. S. pennellii could well be a source of valuable new traits (like yield or disease resistance), and knowing where genetic factors for bad flavours reside would prevent those traits ending up in new varieties.