US researchers are going against the grain of total synthesis and developing new approaches to complex molecules. By leaving out interfering reactive oxygen groups until the end of the synthesis, each step in the sequence becomes a bit more efficient, leading to big gains over multiple steps.

Streamlining organic synthesis is a constant battle, and any new techniques - especially if they involve drastic shifts in strategy - face a difficult transition from simple model systems to the altogether more unpredictable environment of complex molecule synthesis. Christina White and her group at the University of Illinois, Urbana-Champaign, have been developing methods for oxidising simple C-H bonds for several years, but now they have applied them in the synthesis of 6-deoxyerythronolide B, a marine macrolide antibiotic. 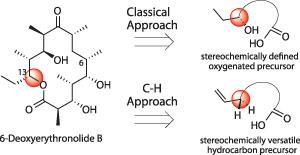 The molecule has been synthesised a few times before, but in each case the macrocyclic ester (or lactone) has been formed by a reaction between an alcohol and a carboxylic acid derivative. White’s approach uses a catalytic reaction whereby the free carboxylic acid on one end of the molecule directly adds to an allylic C-H group at the other end - closing the lactone ring and forming a C-O bond with excellent stereoselectivity. The team was also able to modify the reaction conditions to give the opposite configuration of the C-O group - traditionally very difficult by classical esterification chemistry - thus adding flexibility to the synthesis.

While White admits that this oxidative cyclisation reaction needs a much higher catalyst loading than the model systems and requires some recycling of the reaction conditions to get useful yields, the overall synthesis is remarkably high-yielding, giving a 7.8 per cent overall yield over 22 steps in a completely linear sequence. 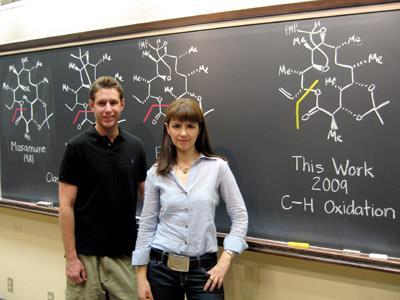 White attributes this to the reduced amount of oxygen being carried through each step: ’Whenever you have reactive functionality that you’re carrying through a linear reaction sequence,’ she explains, ’in every step it’s getting exposed to all sorts of reagents so some of it will react, and those small amounts really add up. If you just have a C-H bond, every step goes a little bit better so you don’t get that erosion.’

’I think this will open people’s thinking processes to late stage functionalisation,’ says Mike Crimmins from the University of North Carolina in Chapel Hill, US, whose group completed a synthesis of 6-deoxyerythonolide B in 2006. ’The true test of any new methodology is whether it’s robust enough to put into complicated systems - and clearly this one is if you set it up right.’ Although he adds that careful planning will be required to make sure the reacting groups are set up close enough to each other to react efficiently and provide good stereoselectivity.