Scientists have discovered that a trace metal is the limiting factor restricting nitrogen uptake in tropical rainforests. The US team found levels of molybdenum - rather than phosphorus, as previously believed - limits nitrogen uptake, which could ultimately restrict the forest’s growth.

Lars Hedin and his team at Princeton University were studying soils in a Panama rainforest to determine what controlled the rate of nitrogen uptake when they made their discovery. Nitrogen is a major component of both nucleic acids and proteins, and is required by plants for growth and carbon dioxide uptake. Tropical rainforests, like the one Hedin studied, get most of their nitrogen from bacteria living in the soil that turn atmospheric nitrogen into biologically usable ammonium. 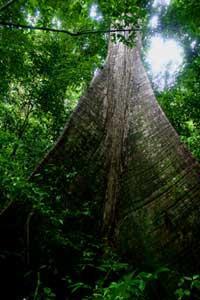 Previous research had indicated that phosphorus was the controlling factor in nitrogen uptake, but Hedin’s results suggest these results were skewed by the trace quantities of molybdenum impurities found in phosphorus fertiliser. Hedin found that adding molybdenum to soil samples, either deliberately as a treatment, or inadvertently as a fertiliser contaminant, greatly increased the rate of nitrogen fixation. In contrast, adding molybdenum-free phosphorus fertiliser did not affect the rate of nitrogen fixation at all.

’It’s actually the supply of this very rare trace metal molybdenum that limits the rate of fixation by bacteria that live in the soil,’ says Alexander Barron, who worked with Hedin on the project. ’This suggests that ecologists should be looking for trace metal limitation much more often than they are. It opens up this whole avenue of inquiry into how trace metals influence these bioprocesses.’

Molybdenum is a cofactor in the central enzyme for nitrogen fixation, nitrogenase. Together with iron it aids the transfer of electrons in the enzyme, helping to split the triple bond of dinitrogen. But in the old and highly weathered soils of the tropics much of the molybdenum has leached out and is unavailable to nitrogen fixing bacteria.

’These type of soils are very common throughout the tropics, but whether this applies to all areas we can’t really say. It raises possibility that molybdenum is a surprising factor that could play a very important role in tropical ecosystems,’ Hedin told Chemistry World.

Paul Falkowski at Rutgers University in New Jersey, US, says that determining the factors controlling the nitrogen cycle has been a major conundrum for biogeochemists for many years. ’It’s the first time that a specific metal like molybdenum has been identified.’ says Falkowski. ’It’s exciting that we now know that a metal in soil can limit nitrogen fixation.’