UK researchers can track the early steps of formation of peptide clumps linked to Alzheimer’s disease using the peptide’s fluorescent ability. This could help design effective therapies for the disease at an early stage.

A peptide known as beta-amyloid forms amyloid plaques that are found in Alzheimer’s disease. Scientists believe that the toxicity of the smallest peptide aggregates formed during the earliest stages of the aggregation process contribute to the neurological damage in the disease. But it’s difficult to study the earliest aggregation steps to find out why the peptide starts to clump together. 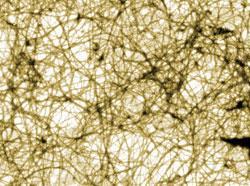 To help shed light on the process, Olaf Rolinski and colleagues at the University of Strathclyde monitored the decay of tyrosine fluorescence (tyrosine is an amino acid present in beta-amyloid) as the peptides started to self-associate. The decay happens in stages as tyrosine’s surroundings change, producing three different forms, or conformers, of tyrosine. The three forms give different fluorescent signals that can be picked up with a fluorescence spectrometer. Using the peptide’s intrinsic fluorescence avoids introducing a bulky, unnatural fluorophore, which could affect the aggregation process.

’Fluorescence is sensitive to interactions on the ?ngstr?m to nanometre scale so it can be used to monitor processes between individual molecules at the early stages of amyloid aggregation,’ explains Rolinski.

The team measured the decay in tyrosine fluorescence at eight different peptide concentrations enabling them to detect early single peptide-peptide interactions, which are invisible in conventional fluorescence experiments. They found that the initial peptide concentration influences what conformation is adopted by individual peptides and determines the rate of their aggregation.

’Although it is difficult to derive structural information from their fluorescence data, the availability of this tool could simplify the study of protein oligomerisation. It could be used to analyse how changes in sequence or conditions affect the rate of oligomerisation as well as analysing the ability of drug candidates to block it,’ comments Xavier Salvatella, an expert in protein aggregation at the Institute for Research in Biomedicine in Barcelona, Spain.