While police forces the world over struggle to keep illicit drugs off the streets, the UK may be moving a step closer to allowing the use of a cannabis-based drug to treat the symptoms of multiple sclerosis (MS). After 10 years of development, Wiltshire-based GW Pharmaceuticals is hoping that its third attempt to gain approval from UK regulators for its cannabis-based drug Sativex will be successful.

Should the treatment be approved, the British government has said it will change the law to allow prescription of the drug - a move that could be considered a step towards changing the widely-held opinion that illicit drugs lack any therapeutic benefits.

Sativex is an oral spray containing a mixture of tetrahydrocannabinol and cannabidiol and the submission to regulators is expected to be made within the next few months. GW Pharmaceuticals is outwardly confident that it has now met all regulatory requirements and has presented positive results from three trials in the last six months - most recently in March when a Phase III trial found that Sativex significantly reduces the severity of spasticity in MS patients.

If approved, the decision would mark a major milestone for supporters of medicinal cannabis use, particularly as just 11 years ago the UK government took the stance that evidence concerning the drug’s beneficial properties was weak.

But while the move to medicinal cannabis could be seen as a breakthrough, researchers studying whether other illicit street drugs could have therapeutic benefits are still struggling to break through the bureaucratic red tape.

It took time for the therapeutic value of cannabis to be recognised, despite the fact that surveys suggested ’significant proportions’ of disabled people took the drug for symptom management. GW Pharmaceuticals understands that as many as a third of the 85,000 MS patients in the UK have considered taking the drug to reduce their symptoms.

Trials being conducted or awaiting approval

In 2001, the company presented results that finally changed the UK government’s opinion of Sativex - of the first 53 patients in three trial centres, 41 benefited from taking the drug and the safety profile was deemed excellent. But it still took eight years for the drug to be in a position where British regulators would even consider approving it. The forecast for psychedelic drugs such as LSD (d-lysergic acid diethylamide) and ecstasy or MDMA (3,4-methylenedioxy-N-methamphetamine) as psychotherapeutics is even less rosy.

’I used to say it would take five years to get these drugs to market,’ says Rick Doblin, founder and president of US-based Maps (Multidisciplinary Association for Psychedelic Studies) which funds such research. ’Now I say it would take 10 years.’ But another supporter, Amanda Feilding, director of the Beckley Foundation, Oxford, UK, which investigates consciousness, believes even 10 years is too optimistic.

After a flurry of therapeutic research on these drugs in the 1950s and 60s, they hit the streets - causing what Feilding calls a ’hysterical reaction’. Fearing the drugs would dissolve the social fabric of society through their ability to alter the mind, governments banned them and put an end to their evaluation as potential therapeutics.

Small studies have now started to crop up again, reflecting the idea that psychedelics may provide a better chance of resolving psychiatric problems as they reach parts of the psyche that psychotherapy alone may not reach. Many of the current treatments that make up the $20 billion (?14 billion) psychiatric drug market are not always effective - and with one in four people suffering from a psychiatric disorder at some point in their life, it can be argued there is a large unmet clinical need.

Recent results from a US trial looking at post traumatic stress disorder found more than 90 per cent of patients taking ecstasy showed a significant improvement in their condition. Meanwhile, interim results from a Swiss study indicate that LSD may improve the quality of life for people suffering from anxiety while causing no serious side effects.

But while results look promising, the reputation of psychedelics and other banned drugs still stick, making it difficult to convince doubters that these drugs could have therapeutic value. Feilding says it is a ’travesty to science’ that ’scientific research is stopped by prejudice not by good rational decisions’.

One of those who is hesitant about the benefits is Ken Checinski, senior lecturer in addictive behaviour at St Georges, University of London, UK. He calls the evidence to date ’very poor’, saying the therapeutic window between benefit and harm is small.

However, he acknowledges the drugs should be reviewed and evaluated. ’Most substances have potential benefits so we should not dismiss these substances out of hand because they are controlled or have the potential for abuse.’ 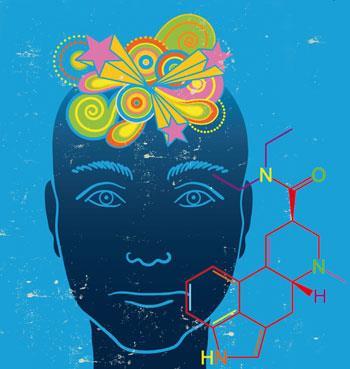 LSD"s mind-altering properties led to it being banned

Getting to clinical trials

While psychedelics are classed as Schedule 1 in the UK - not seen to have any therapeutic value - Feilding believes the recent approvals for clinical trials is a sign of more acceptance.

The US Food and Drug Administration (FDA) is open to research and many psychedelics have been approved as investigational new drugs, while the National Institute on Drug Abuse has even funded several studies, though these have been into risks, not benefits.

Doblin believes the reputation is changing for the better, with the FDA ’making decisions based on science, not politics’.

The UK, however, still remains more conservative and getting ethical and regulatory approval for clinical trials is difficult because of the controlled nature of the drugs. The Beckley Foundation decided against applying for LSD trials in the UK because it was advised it would not pass ethical approval because of the drug’s ’historical baggage’, Feilding says.

In Switzerland, the first LSD trial in more than 30 years is underway; though it took a year to get the trial approved, says Peter Gasser, psychiatrist and lead investigator on the trial which is partly funded by Maps. Normally the ethics committee has to make a decision within a month, but in the case of this trial it took more than six months, a rewritten protocol and an expert report before the committee gave the thumbs up.

’The 60s research was not done with the same rigour, and is therefore not considered valid research by today’s standards,’ she says. ’We need to prove to society that there are benefits if attitudes towards these substances are to change.’

However, even if the trials get approved and produce positive results, there is no guarantee these drugs will be approved for prescription use.

Firstly, the political furore could be huge, says Harry Shapiro, director of communications at DrugScope, a charity that advises on UK drug policy. ’One big problem is the idea that it might be seen to be sort of condoning LSD and ecstasy if they were legitimised as medical products. It might send out the message that these drugs were ok. Can you imagine the reaction to the headline: "E on the NHS"?’

Shapiro says there would have to be overwhelming evidence of benefit for the drugs to get that far.

And to get that far, these studies need funding. Currently, big pharma is just not interested - either because of the reputation and risk of personal injury litigation or because of lack of patent protection and the non-profitable nature of the drugs.

However, both the FDA and the UK’s Medicines and Healthcare Products Regulatory Agency (MHRA) say they will consider psychedelics and other banned drugs on the same standards as other investigational drugs - safety, efficacy and quality - though other aspects will be taken into account, including the risk to benefit ratio, addiction and/or abuse potential, and whether safer alternatives are available.

Even if approved, use of the drugs will likely be restricted, an MHRA spokesperson said.

Indeed, this is the case with Xyrem, which treats narcolepsy with cataplexy and was approved in the UK in 2005. Xyrem is based on the infamous date rape drug GHB (gamma-hydroxybutyric acid) - originally investigated as an anaesthetic in the 60s but later banned by the FDA in 1990 - but safe use of Xyrem is ensured by providing educational materials, strictly controlling the distribution of the medicine and monitoring its use.

There is also consensus that should psychedelics be approved they will have to be part of a therapeutic package with psychotherapy.

But that is a long way off - 10 years and $10 million at least. Feilding says we should just get the research done and set up a database of information so that it’s there ’for when the tide does turn’.