The UK chemistry sector has given a mostly cool response to a government scheme to attract top chemists, chemical engineers and other scientists from outside the EU, while tightening restrictions on immigration.

During the first year of the scheme, which will begin on 9 August, 1000 visas will be made available to top scientists and engineers and people from the humanities and arts from outside the EU, who will no longer need to be sponsored by an employer. 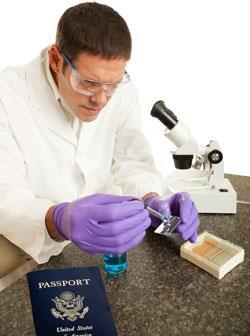 Science associations are unimpressed with the scheme, which they fear will put off researchers from outside the EU

Instead of the UK Border Agency (UKBA) selecting the special visa holders, it has arranged for the Royal Society to nominate up to 300 places. The Royal Academy of Engineering will be able to nominate 200 places, and in humanities and social sciences 400 places are set aside for Arts Council England and the British Academy.

The nominations will include those already considered to be ’exceptionally talented leaders’ and those ’with the potential to be recognised as leaders’, according to the UKBA.

The government has introduced the scheme in response to protests from the UK scientific community and industry. Concerns have been raised about the negative impact of the government’s policy to cut the number of skilled non-EU migrants entering the country by around a quarter.

’The Chemical Industries Association is delighted at the news that the government has relaxed limits for scientists,’ says Simon Marsh, the association’s employment relations director. ’We have campaigned for scientific talent to be allowed access to the UK. We believe this will help our country’s social, environmental and economic progress.’

Other organisations continue to openly oppose the idea of any limit on the numbers of elite scientists coming into the country. ’We’re not exactly thrilled that the government wishes to limit the amount of exceptional scientific talent coming into the country,’ says David Phillips, president of the RSC.  ’Given the chemical sciences’ intrinsic value to the country’s prosperity, I’m sure the Royal Society will operate an open and transparent policy in choosing its 300 talented scientists and that among those chosen will be many outstanding chemists.’

The Institution of Chemical Engineers (IChemE) is highly critical of the whole project which it says is economically and intellectually misconceived. ’Is this a good idea?’ asks David Brown, IChemE’s chief executive. ’Emphatically no, for UK academia, UK investment, the UK skills and talent base - which is what attracts investment - and for the UK economy.’

’The figures may suggest the quota is enough,’ he continues. ’But that doesn’t take   account of the people who will be put off applying altogether because the UK is sending out a negative message, implying it’s difficult, uncertain and we don’t really want you Mr Einstein.’

These views are echoed by the Campaign for Science and Engineering in the UK (CaSE), which has been trying to persuade the government not to put a ceiling on numbers of talented scientists and engineers entering the UK.

’This project has a major flaw,’ says Imran Khan, CaSE director.  ’We don’t want a limit on talent. We want as many exceptionally talented people as possible coming into this country to do research.’

The Royal Society is not revealing details yet on exactly how the scheme will operate because these still need to be ironed out with the UKBA, despite it coming into operation in only two to three weeks’ time. But the UKBA has made clear it will be up to the professional organisations to decide how their nominations should be allocated between different disciplines.

’The sharing-out of  the different disciplines will be determined by the professional bodies, ’ says a UKBA spokesman. ’[They] are happy to be involved in this route, which will of course benefit the fields they are concerned with.’