The discovery of how a unique antibiotic kills its targets has uncovered a new way to tackle resistant superbugs.

A team of chemists and structural biologists have studied how the natural antibiotic lactivicin interacts with a crucial bacterial protein.

Nearly all antibiotics kill bacteria by targeting the penicillin-binding protein (PBP) in the cell wall. But some bacteria’s PBPs have mutated into forms that don’t bind the drugs, and over-use of antibiotics has meant the development of new antibiotics can’t keep up with the bugs’ evolution.

Lactivicin, discovered in the 1980s by Japanese scientists, was known to hit the PBP target, but unlike all the antibiotics that have been used before the LTV molecule doesn’t contain a particular chemical structure: a

The British, French and Belgian team used crystallography to show for the first time how PBPs interact with LTV and a more potent derivative, phenoxyacetyl-LTV (PLTV). They have also demonstrated that pneumococcal bacteria resistant to antibiotics with a

-lactam ring have no defence against LTVs. 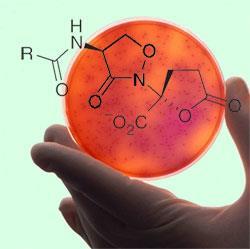 Understanding the activity of lactivicin (structure above) could pave the way to new, more effective antibiotics

The ability to visualize the LTV-PBP interaction is crucial. The crystal structure highlights pockets in the protein’s active site that could be targeted in order to design even better antibiotics. ’We hope that this will help people figure out how to functionalise the molecule to improve its activity,’ said the leader of the British group, Christopher Schofield of the University of Oxford. The team report their findings in Nature Chemical Biology this week.

In place of the

-lactone. The researchers have shown that both of the rings in LTV open up when the molecule binds to the protein. ’It’s a chemically interesting mechanism, rather than something that just fits into the PBP active site,’ Schofield said. The two rings are crucial to the reactivity of LTV, and thus boost potency towards PBPs. ’The opening of the second ring prevents reforming of the first ring. This makes the reaction in effect irreversible,’ said Schofield.

Shariar Mobashery of the University of Notre Dame, Indiana, described the work as ’a terrific collaboration. The issue of antibiotic resistance has become quite acute and it is studies like this that will pave the way in finding solutions to the clinical problem,’ he told Chemistry World.
’PBPs have largely been ignored by the pharmaceutical industry as research targets for the last decade or more,’ added Schofield. But he cautioned although the LTVs may offer a way around the problems with

-lactams, bacteria will eventually develop resistance to these compounds as well.