Unlocking the mysteries of ice

The unusual properties of ice under compression are due to Coulomb repulsion between bonding and non-bonding electron pairs, say scientists from Singapore and China.

Frozen water behaves differently from other materials in response to pressure. It has abnormally low compressibility, and applying pressure decreases rather than increases the critical temperature for phase transitions. These anomalies have puzzled scientists for many years and satisfactorily modelling them has proven a great challenge.

Now, Chang Sun at Nanyang Technological University and his colleagues at Jilin and Xiangtan Universities have developed a new method to simulate these properties accurately. Their work has also helped to clarify the physical basis of the behaviour.

The key to their model is in considering O...H-O as the basic structural unit of ice. The left hand oxygen forms a hydrogen bond using its lone pair of electrons to polarise electron density around the hydrogen. Meanwhile, the hydrogen shares its electron with the right hand oxygen to form a real bond. 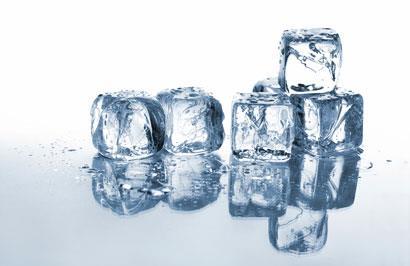 Sun’s model works better for the system than commonly used rigid non-polarisable models. Such models ’have a fixed molecular geometry so they cannot intrinsically account for changes in the molecular geometry,’ according to Jose Abascal, an expert on the theoretical chemistry of water and ice, Universidad Complutense de Madrid, Spain. The rigid models ’approximate the H2O molecule as two point charges with a fixed bond length and bond angle,’ explains Sun. However, ’what changes with the applied stimulus are the angle, length and energy of the hydrogen bond and the associated electron polarisation.’

Sun’s results indicate that the repulsion between the lone pair and bonding pair causes the O...H hydrogen bond to shorten and the O-H real bond to lengthen. At sufficiently high pressure, the hydrogen bond and real bond become equivalent in length. The change in binding energy of the real bond dominates, causing the observed effects on physical quantities as it lengthens and weakens.

Sun now anticipates that there is further work to be done in unravelling the many other anomalies of ice, including why freezing water expands.