Danish scientists have used a micro device to isolate centimetre-long portions of human DNA to help study the genetic make-up of diseased cells.

Rodolphe Marie at the Technical University of Denmark, Kongens Lyngby, and colleagues made the device to isolate chromosomes from cell extract samples and manipulate them in such a way that the strands remain intact.

Chromosomes - strands that carry genes in the cell nucleus - are made of DNA pieces that are up to 8cm in length. Being able to sequence DNA accurately is a challenge. It involves determining the order of the nucleotide bases - adenine, guanine, cytosine and thymine - in a DNA molecule and can be used to look for patterns occurring in diseased cells.

When cells divide to reproduce, chromosomes get surrounded by proteins, which act as glue and compact the DNA, making it more stable. This protects the DNA, allowing it to be handled easily. Most chromosome handling is done in test tubes and once the protein glue is removed, the DNA strands break into tiny fragments, making gene sequencing difficult. 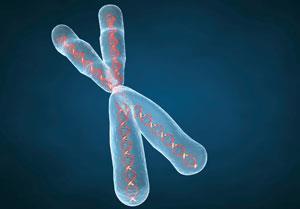 Marie’s technique allows the DNA to remain intact so that the gene sequence can be read in one go. The device is made from silicon and consists of an isolation zone in which cell samples are trapped and washed to obtain chromosomes. The team injected leukaemia cell extract into the device and flushed protease through it, which digests the proteins around the chromosomes. They then used a flow of water to lead the protein-free DNA strands into a nanoslit, one at a time. They found that the DNA could be stretched by increasing the flow through the nanoslit, after which they removed the intact lengths of DNA.

’This fantastic micro-device makes it possible to do lots of things with chromosomes that we could not do before,’ says Kazuhiro Maeshima, an expert in the organisation of long string DNA in chromosomes from the National Institute of Genetics, Mishima, Japan. ’We can observe morphological changes of single chromosomes with changing ion concentrations. Until now, it has been very difficult to see the morphological change of a single chromosome, because chromosomes are very fragile and sticky once they are swollen with low concentration salt solutions,’ he adds.

Marie’s team will continue to improve the device. The DNA extracted using this device is quite jumbled, says Marie. ’Finding a way to order this mess, and ultimately, to linearise centimetres of DNA remains a major challenge,’ he concludes.