American and Russian scientists studying the molecular structure of vodka have suggested that our choice of spirit could be influenced by its molecular make up.

Many vodka brands are simple mixtures of ethanol and water, with classic vodka composition of 40 per cent alcohol by volume. However vodka drinkers often display a preference for one brand of vodka over another. Dale Schaefer and colleagues at the University of Cincinnati and Moscow State University sought to determine whether there might be a molecular basis for this, by analysing the structural differences of five different vodka brands.

’We had previously studied water-ethanol solutions and wanted to see whether there was a difference among vodka brands in their so-called structure,’ says Schaefer. The team measured the density, 1H NMR, Raman and infrared (IR) spectra of the five vodkas, comparing them with data obtained for straightforward ethanol water mixtures. 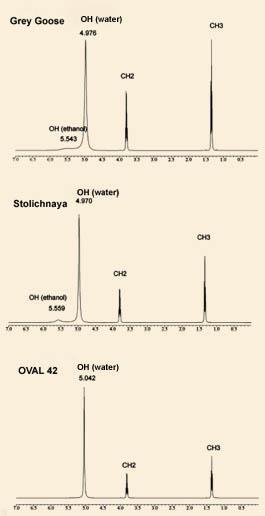 ’We observed measurable differences among the brands,’ says Schaefer. Analysis of the Raman and IR spectra indicated all the solutions contained four components - pure water, pure ethanol, and two hydrates. However the concentration of one of these hydrates, E?5.3H2O, varied between vodkas.

’It looks like this can be used as a measure of the physical properties of vodka,’ says Schaefer. The team defined a structurability parameter - a measure of the vodka’s ability to form the hydrate structure within the solution. They proposed that the hydrate in question takes the form of a caged complex, with around five water molecules to every one ethanol molecule. The more hydrate present, the less free water molecules in solution.

However Dirk Lachenmeier, head of the alcohol laboratory at the Chemical and Veterinary Investigation Laboratory in Karlsruhe, Germany, thinks the team’s conclusions are conjectural. ’There is no basis to push that this might be the holy grail of vodka taste differentiation,’ he says.

Tests show most people cannot distinguish between 30 per cent and 40 per cent vodka, so they may be hard-pushed to make out the subtle differences found by Schaefer.   And, although thought of as a ’pure’ spirit, Lachenmeier says vodka manufacturers are allowed to slightly influence the taste with different additives such as citric acids.