US researchers have found water in rocks from the Moon - prompting new questions about its origin. The discovery was made by analysing small glass beads from lunar sand scooped up by Apollo mission astronauts.

The standard ’giant impact’ theory for the formation of the Moon assumes that a huge body crashed into the early Earth, sending massive amounts of molten magma into orbit. This disc of magma gradually coalesced and cooled into the Moon as it is today. But since the Moon is too small to maintain an atmosphere, any volatile gases or liquids, such as water, were thought to have bubbled away and escaped into space.

Now a team at Brown University, Rhode Island, US, have thrown this theory into doubt by finding water in the titanium glass beads that are scattered all over the lunar surface. These are the result of huge lunar volcanic eruptions that occurred billions of years ago. 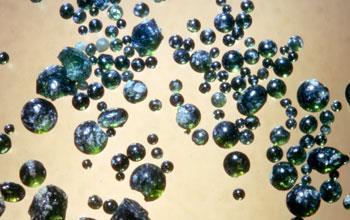 Importantly, the beads are made from material that originates from deep within the moon - avoiding any chance that the water could have come from external sources such as comets hitting the surface.

Using high precision secondary ion mass spectrometry (SIMS), the team were surprised to discover that the beads contain around 45 parts per million of water. By modelling the dynamics of the volcanic eruption and rate of cooling, they calculated that approximately 95 per cent of any water would have been lost during volcanic activity that brought the beads to the surface. This leads to an estimate that lava deep within the Moon contains water at up to 745 parts per million - similar to that in Earth’s upper mantle.

’Our model is not perfect - so although we know there is water there, we cannot be sure exactly how much,’ said Alberto Saal, lead author on the research. Even so, Saal adds, the presence of water should definitely be considered in future models of the Moon’s formation.

’This is a surprising and important result,’ says David Stevenson, an expert on the evolution of planets at the California Institute of Technology. ’Water lowers the melting point of rocks, so it could change the evolution of a body such as the Moon.’

’But one important thing to note is that the moon is probably heterogeneous,’ Stevenson added. ’It is possible that during a giant impact some areas of water could have become trapped. The discovery of water in one place doesn’t necessarily mean the rest of the moon is the same.’