DNA profiling used to track the spread of the American bullfrog

Sending volunteers out into the field is a time-consuming and expensive way to discover the different species of animal life living there. Now, a team of scientists based in France has demonstrated that DNA profiling could be a quick, effective and relatively cheap alternative.

Pierre Taberlet of the Laboratoire d’Ecologie Alpine in Grenoble and his colleagues designed species-specific primers that would amplify short, 79-base-pair fragments of mitochondrial DNA (mtDNA) from the American bullfrog, an invasive amphibian that can have devastating consequences for native fauna. These animals are continually shedding cells into the water, says Taberlet. 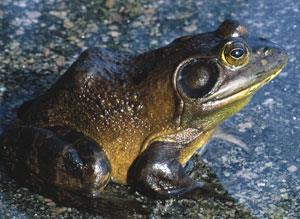 The researchers collected water samples from nine different wetland sites across France, and succeeded in amplifying bullfrog DNA at every place the species had been spotted.

In three ponds where the species had never been recorded, the samples appeared to be free of bullfrog DNA. It’s unknown how long it is before the DNA breaks down into fragments that are no longer recognisable as bullfrog, but it’s likely to be more than a week, estimates Taberlet.

"The cost of getting the information this way is lower than sending people out into the field for long periods," he says. With massive sequencing projects underway, it should be possible to design "universal primers" that will allow amplification of an entire suite of environmental DNA fragments from all manner of species.

Similar approaches have been used to map the presence of microorganisms - but never an animal as big as a frog.

The technique could be a powerful way to detect the presence of near-extinct species, says Eske Willerslev, professor of evolutionary biology at the University of Copenhagen, Denmark - and an expert on the retrieval of fragmented DNA from ancient biological material. But, he warns, if you have very low levels of DNA, the risk of contamination becomes very severe. ’If you want to develop this kind of technique on a broad scale you would have to establish labs that know how to handle low-abundance DNA,’ he says.