Bacteria-packed fabrics that can suck pollutants out of water have been made by American researchers. These ’living fabrics’ should be very useful in removing heavy metals such as mercury and uranium from wastewater streams - and are a step towards designing clothing that can clean itself.

’We can now engineer bacteria to eat almost anything, so bacterial systems can be extremely effective at cleaning up water,’ says Miriam Rafailovich, who worked on the project at  Stony Brook University in New York, US. ’But pushing lots of water through a gel is very slow, so we needed to find another way.’

To achieve high water flow the team made sheets from polymer fibres with bacteria trapped inside them. This has previously been awkward because manufacturing conditions need to be gentle enough to keep bacteria alive.

They used a process called electrospinning to draw micrometre-sized polyethylene oxide fibres out of bacteria-filled water. This process uses an electric field to charge droplets of the viscous liquid and stretch them out into very thin streams. 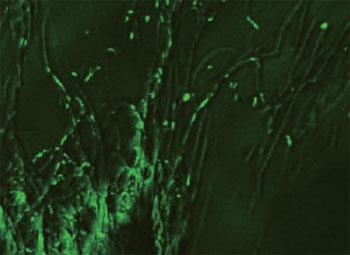 E. coli bacteria (fluorescent green) can be seen trapped in the polymer fibres after electrospinning

Although the process gives the bacteria a short electric shock, 97 per cent survive to become incorporated into the fibres, where they can be kept alive for several months,’ Rafailovich told Chemistry World.

Crucially, the team then developed a non-toxic way to bind the fibres together, preventing them from re-dissolving when exposed to water. They used a mixture of ammonium persulfate, ascorbic acid and ferrous sulfate in glycerol to make the fibres cross-link without killing the bacteria.

’In our material we can have a very high throughput of water - and the bacteria are going nowhere because they’re held inside the fibres,’ Rafailovich told Chemistry World. ’We are very hopeful that this material will be used in the remediation of radioactive water - such as cleaning up uranium at power plants.’

Microbes were encapsulated at the junctions where fibres fused together (left) and in single fibres (right). Inset illustrates a bacterium encapsulated in cross-linked fibres

’This is a great proof-of-principle with a lot of potential,’ says Suwan Jayasinghe, who first demonstrated the ability to spin cells into fabrics at University College London, UK. ’There could be a huge number of applications - for example if a t-shirt was made out of this material, it would be able to eat sweat and prevent odours from building up.’

The fabrics could also be used as a controlled ’feeder’ layer to keep other cells alive or grow stem cells, but there is still a lot of work to be done, Jayasinghe adds. The next steps will involve integrating different components into fabrics, such as muscle cells, and also making better use of the properties of the fabric.

Bill Sloan at the University of Glasgow envisions the process helping in the design of microbial fuel cells. ’Biologists have been developing synthetic organisms to produce biofuels from waste - but in the real world many different species could potentially invade and disrupt the genetically engineered population in a bioreactor. By locking the live synthetic organisms into a material then it should be possible to make the population robust to invasion.’