White LEDs to plummet in price

Home and office lighting using white LEDs is one step closer to becoming reality now that researchers in Cambridge, UK, have developed technology which could slash the cost of their production.

Blue and white LEDs (light emitting diodes) are made from the semiconductor gallium nitride (GaN) and are currently laid on the surface of synthetic sapphire wafers. The two-inch sapphire wafers (made from titanium oxide) are expensive, but Colin Humphreys and his group have found a way of building GaN LEDs on much bigger and cheaper six-inch silicon wafers for approximately the same processing cost. 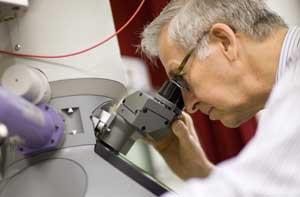 Using bigger wafers reduces the impact of so-called ’edge effects’, as Humphreys explains: ’On any wafer there is a ring approximately three millimetres wide around the edge where the LEDs are generally no good. Obviously with a six inch silicon wafer this has a lot smaller impact than on a two-inch sapphire one. Taking into account the increased area of the silicon wafers, it means you get around ten times more LEDs in total from each wafer.’

This corresponds to an overall 90 per cent reduction in production costs, bringing the prospect of cheap LED-based home lighting a significant step closer. Not only are GaN LEDs more energy efficient than fluorescent low-energy bulbs, they are also instantly bright, are compatible with dimmer-switches and contain no mercury, simplifying their disposal.

The devices are made by heating the wafer to 1000 ?C and then firing a mixture of ammonia and gallium trimethyl (GaMe3) at it from a ’showerhead’. ’The gases then decompose,’ explains Humphreys, ’leaving gallium and nitrogen atoms on the surface, which skate around until they find each other and become bonded into the crystal lattice. The problem is there is about a 50 per cent difference in thermal expansion coefficient between silicon and GaN, so as the wafer cools the gallium nitride tends to crack under the introduced tension. We discovered that if we build up alternating layers of aluminium gallium nitride (AlGaN) and GaN, then this can counteract the tension on cooling and stops the GaN from cracking.’

GaN LED bulbs are already used to illuminate Buckingham Palace and the Severn Bridge, but one of the major problems with earlier generations of blue and white LEDs was their lifetime. Standard red LEDs last around 100,000 hours, but blue and white ones used to be limited to only a few thousand hours. This, explains Humphreys, is all down to the packaging material around the LED chip: ’The epoxy material that was used before could become brittle and discolour over time. These devices do produce a small amount of heat, so the different parts need to be able to move with each other in expansion and contraction. Using a high-grade silicone material more or less completely solves this problem - so the new devices also last 100,000 hours, which at an average use of 4 hours per day is about sixty years.’

While the basic research on the project was funded by the UK Engineering and physical sciences research council (EPSRC), Humphreys and his group are collaborating with several companies, including RF Micro Devices (RFMD), Thomas Swan, QinetiQ and Forge Europa, under the auspices of the UK government’s Technology Strategy Board (TSB) electronics and photonics programme, to bring the technology into the marketplace as a high efficiency, low cost lighting system for homes and offices.

Steve Clements from RFMD, who are project leaders for the TSB collaboration, is excited about these developments. ’Our collaboration with [Humphreys] has been immensely successful - but from a commercialisation perspective there is still some way to go,’ he adds. RFMD are keen to exploit the technology if it can be translated into a commercially viable business, but Clements explains that the project is still in the early stages. Humphreys is more optimistic, looking forward to the possibility of having a world-leading manufacturer of gallium nitride LED lighting devices based in the UK within the next five years.