The molecule, which contains the first structurally characterised unsupported uranium and rhenium bond, was created by Benedict Gardner, a PhD student in Stephen Liddle’s research group at Nottingham University.

There is a continuing debate regarding the extent of covalent bonding in f-block compounds, and developing a better understanding of how the bonding in these complexes varies could eventually lead to the development of improved systems for extracting and separating radioactive lanthanides and actinides from solution.

The debate is somewhat complicated by the fact that until now, only four unsupported uranium-metal bonds had been structurally characterised - one of which (containing a uranium-gallium bond) was described by Liddle’s group at the turn of the year.

This lack of structural data from which to draw conclusions about the nature of the actinides is partly due to the difficulty of making the compounds. While Liddle maintains that ’standard Schlenck line and glovebox techniques’ were used during the molecule’s preparation, the need to ensure that oxygen and water are rigorously excluded from the reaction is hard to overstate.

Crystal structure data for red crystals in the uranium-rhenium complex suggests that the bond is unsupported and has no need for a hydrogen bridge to stabilise it - which can often be the case. 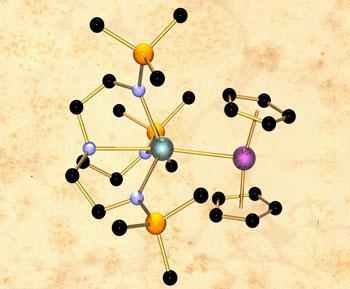 Because hydrogen atoms can be very difficult to locate using crystallography techniques, especially when located close to heavy elements like uranium, the group carried out computational modelling to confirm their findings. Those calculations also indicated that, just like the gallium-uranium system reported earlier in the year, the bond contained both

’The calculations indicate that the

-backbonding you see in transition metal complexes, but do show that uranium f orbitals are involved,’ says Liddle. ’The computational model can be almost exactly superimposed onto the crystal structure data so we’re very confident about the bonding data.’ 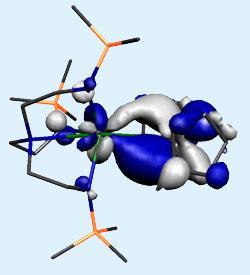 ’This is a nice contribution that adds new structural and theoretical insights to the recent resurgence of interest in the fundamental chemistry of metal-metal bonds involving actinides,’ says John Arnold, an expert in f-block chemistry and professor at the University of California, Berkeley, US.

’The prospects that further developments in synthesis and theory in this area will lead to a better understanding of bonding in actinides look to be bright.’