When Xu Guangxian, now an 89-year-old chemist at Peking University, returned to China in 1951, he could never have guessed the varied path his research would take, nor the diverse fields within which he would work.

Yet it was this constantly shifting research route that would eventually lead him to win the State Supreme Science and Technology (S&T) Prize, China’s biggest award for scientific achievement.

On 9 January 2009, Xu and 83-year-old brain surgeon Wang Zhongcheng of Beijing Tiantan Hospital were awarded the 5 million yuan (US$730 000) prize by Chinese president Hu Jintao at the annual national S&T awards conference. Xu won the prestigious award for his research into rare earth extraction and its industrial application, and becomes the second chemist to receive the prize since its debut in 2000.

Xu was born in 1920 to a wealthy family in Zhejiang Province, but continued wars and social upheavals in China during the first half of the 20th century soon forced them into bankruptcy. Undeterred, Xu applied himself to his studies and enrolled at Shanghai Jiaotong University in 1940, and in 1946 won the chance to study in the US. Five years later, shortly after he had graduated from Columbia University with a PhD in chemistry, the Korean War broke out.

Xu and his wife, fellow chemist Gao Xiaoxia (1919-1998), quickly returned to China before the US Congress could pass an act which would force Chinese students to become US citizens and stop them returning to Communist China. In May 1951, he was hired by Peking University as an associate professor.

Unfortunately, the new republic did not have the resources to support Xu’s theoretical studies in quantum chemistry, his academic speciality. Instead, he embarked on more practical research into coordination chemistry, focusing on metal extraction.

Even this field of study, however, proved too far removed from the country’s immediate needs. The government required Xu to change focus, and in 1956 he switched to radiation chemistry, providing scientific support for the nation’s ambitious project to develop atomic bombs. His work focused particularly on extraction of nuclear fuels.

Despite the fact that these changes drew him further away from his love of theoretical quantum chemistry, Xu did not complain. ’I think it was a need of our nation. We returned [from the US] to serve the national need,’ he says.

In May 1966, the outbreak of the disastrous Cultural Revolution (1966-1976) gave Xu a chance to return to theoretical research. To avoid the impact of the revolution, Xu’s department halted atomic research, leaving him with free time to study quantum chemistry at home, though in poor working conditions. 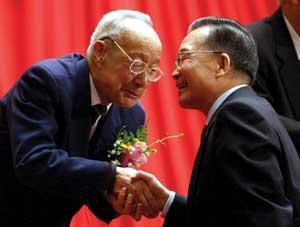 This happy period did not last long. In October of that year, Xu and Gao were detained on suspicion of being spies for the former Kuomintang government, overturned by the Communist Party in 1949. Many academics were detained or put under house arrest at this time, and asked to expose others’ crimes.

By May 1968, dozens of professors at Peking University had chosen to end their lives as a result of the persecution and insults they had endured. Later that month, one of the suicides touched Chairman Mao Zedong, who asked that the cruel prosecutions stop.

Xu and his wife were held in a labour camp in Jiangxi Province until 1972 when another national demand ’liberated’ them and sent Xu back to Peking University. He was then dispatched to study the extraction of praseodymium and rubidium from rare earth metals for use as laser materials.

During this time, Xu made his greatest breakthrough. Without any established technical route or theoretical guides, he thought of applying his previous research in extracting isotopes of uranium to rare earth extraction - and succeeded.

This achievement was hugely significant to China, rich in rare earth resources but at the time unable to extract elements from it. After the end of the Cultural Revolution, Xu was able to spread word of his technique. With his contribution, China became the world’s biggest exporter of rare earth metals.

In the early 1990s, despite his age, Xu used his position as chair of the chemistry sector of the National Natural Science Foundation of China to launch several key basic research programmes into rare earths. But Xu was still unsatisfied with China’s rare earth research. In 1999, he wrote that although China had realised high purity extraction of rare earth metals, the country had failed to lead research into the applications of these metals in electronic parts and other high-tech industries.

Li Lemin, a chemist at Peking University who was Xu’s graduate student in 1960s, described Xu’s success as a result of his persistent academic pursuit, despite repeated academic alternations and frustrations. Even in rare earth research, where he made his name, Xu had a 20 year struggle to establish a national rare earth chemistry lab at Peking University. ’The final success is because Xu’s perseverance has touched ’God’,’ Li says.

In the past decade, after retiring from front line lab research, Xu has taken on another role - maintaining the fame and dignity of chemistry.

’Chemistry is thought to be too conventional to be important,’ Xu wrote in early 2000, ’But this is because chemists are too humble to claim their great achievements. If the discipline’s image as an ’archaic study’ deters excellent students from entering the field, there will be a big problem.’

’Chemistry is not the accompanying science to physics and biology, but a central discipline. It will never disappear.’