The Nobel prize winner shows his artistic side 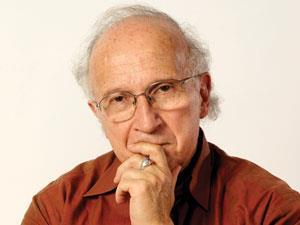 Roald Hoffmann, chemistry Nobel prize winner in 1981, offers his first selection of poems – distillations of his experiences both inside and outside the laboratory. The metamict state is a delightful pot pourri for chemists (and others) to dip into.

Many of Hoffmann’s poems have scientific themes, often combined with vivid descriptions from the ‘outside’ world. Some paint a gentler picture of academic life, such as Next slide, which conjures up a picture of a sleepy audience listening to the rather unpolished presentation of a new research student.

In some ways these poems remind one of Betjeman – they show the same acute observation of people and places, the same lack of embroidery.

Ed. Hoffmann, who remains an emeritus professor at Cornell University in New York, US, followed up his book The metamict state with further poetry collections –  Gaps and Verges (1990), Memory Effects (1999) and Soliton (2002).  Continuing to demonstrate his creativity Hoffman has also co-written a play with fellow chemist Carl Djerassi, entitled Oxygen, which has been performed worldwide and translated into 10 languages.

A recent book, entitled Roald Hoffmann on the philosophy, art and science of chemistry, edited by Jeffrey Kovac and Michael Weisberg (ISBN 9780199755905), was reviewed in the December 2012 issue of Chemistry World. You can find the review on page 69 of that issue.