A new definition of the mole

The story behind changing the unit at the heart of chemistry

The mole became part of the International System of Units (the SI) in 1971. Currently, it is defined as the amount of substance that contains as many entities as there are in 0.012 kg of carbon-12. But the need to redefine the kilogram has been discussed for decades – not least because of the long-term instability of ‘Le Grand K’, the artefact that defines the kilogram. Following the success of the 1983 definition of the metre, which is based on the speed of light in vacuum, the International Committee for Weights and Measures (CIPM) decided that this is also an opportune time to recast the definitions of all SI base units in terms of the most stable things known to scientists: physical constants. 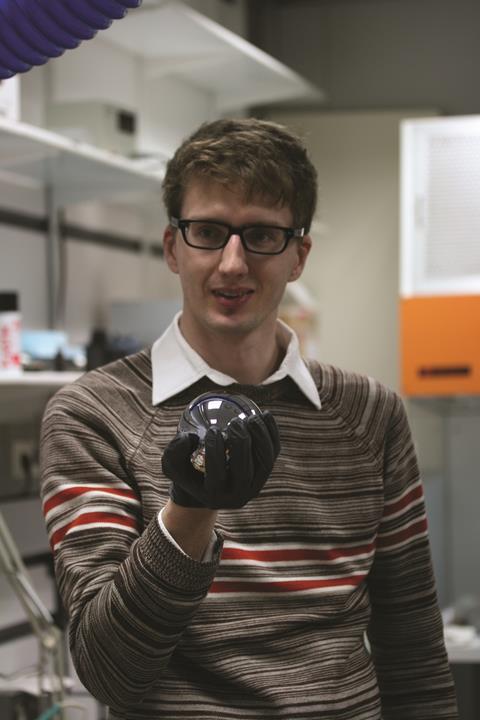 The Avogadro constant will be used to define the mole. Since Jean Perrin received the Nobel Prize for determining its approximate value in 1926, the progress in determining the Avogadro constant has been enormous. Today, the best estimate of the Avogadro constant comes from the Planck constant determinations at Canada’s National Research Council: 6.022140772×1023 with the uncertainty of nine parts in 109. This remarkable precision now enables us to rewrite the definition of the mole in the most absolute terms possible. In fact, the mole will become the only SI base unit that is defined independent of any other units.

The current definition of the mole implies that the amount of a substance is best determined by measuring mass. While this works for most measurements of chemical amounts, it does not follow that the definition of the mole must be tied with the definition of the kilogram. Moreover, studies have shown that the amount of substance is often (incorrectly) identified with mass. The present definition also obscures the mole’s utility, and most chemistry textbooks already view mole as an amount of a substance containing an Avogadro number of entities. Therefore, the proposed new definition states that: ‘one mole contains exactly 6.02214076×1023 elementary entities.’ This has the advantage of simplicity. Writing for the International Union of Pure and Applied Chemistry (Iupac), Peter Atkins aptly noted that ‘the new definition cuts to the core of the meaning of one mole, and is therefore to be welcomed […] there can no longer be any excuse for misunderstanding its definition.’

Even so, this definition has taken a long time to come together. Serious discussions on a redefinition of the mole started in around 2005, and it took about a decade to reach consensus. Needless to say, not everyone likes the new definition – and some prominent voices have even argued that the mole should be removed from the SI altogether.

Around 2010, discussions were focused on the fundamental anchor for the mole: should the molar mass of carbon-12 remain the defining feature, or should it be the Avogadro constant? One must note that pegging mole to the Avogadro constant is not the only alternative – other exotic ways to define mole have been noted. An interesting (and perhaps least useful) definition could be: ‘The mole is the amount of substance of a system which contains as many elementary entities as there are atoms in a sample of potassium-40 that has an activity of 10599044s–1.’ In the spirit of the above definition, Bertram Boltwood and Ernest Rutherford used radioactivity-based methods to determine the Avogadro number in 1911.

Other problems have been highlighted. If one mole of a substance is defined as the amount having certain number of entities, it is clear to many that this number can only be an integer. Hence, to further maximise the clarity of the definition, we should use explicit integers (with all numbers written out). This is impractical for the Avogadro number, which is why some have suggested a very appealing alternative: 844468853 (at a cruder level of accuracy, one might enjoy the ‘binary’ mole: NA ≈ 279 mol–1).

One of the most interesting arguments against the new definition is that the molar mass of carbon-12 will no longer be 12 g/mol exactly. It will come as a surprise to many chemists to learn that, in fact, this isn’t a change at all. In 1980, the previous definition was clarified to only refer to unbound atoms; forming chemical bonds reduces the total mass slightly, meaning 12 g of pure carbon-12 in the laboratory contains slightly more than one mole of carbon atoms. In this context, the new definition of the mole is more fundamental than the present definition.

Resistance towards the Avogadro-based definition of the mole has largely been due to the belief that Avogadro constant is not a universal constant of physics, and that its numerical value has no particular physical meaning. While some constants are indeed more fundamental than others, one should not conflate ‘being fundamental’ with ‘not being useful’; ultimately, many of the decisions regarding the units reflect choices made out of practical considerations. Today we have both Boltzmann and Avogadro constants because thermometers came before our understanding of thermodynamics or statistical mechanics, and because chemists were able to compare the amounts of chemical substances before knowing the actual number of atoms involved. The SI is not solely down to logical necessity.

Like with many other new SI definitions, this new mole will not affect everyday measurements – but it is likely to affect our everyday understanding of the measurement units.

The mole is a part of the International System of Units and it can be changed only by the decision of the General Conference of Weights and Measures (CGPM). However, in practice the definition of the mole emerged over the last decade through close collaboration between the various Task Groups of CCQM, CCU, and IUPAC all of which influenced to a large degree by public and private communications from countless scientists. You can see the progression of the definition (with annotations by Juris Meija) in this document.