A while ago I was a consultant for a BBC series ’Chemistry: a volatile history’ that traced the history of elements from ancient times to the latest transmutations. After months of filming there was a party on the night of the broadcast. As the credits rolled, the producer leant over to me and said, ominously, ’And now let’s see the mail’. Dozens of letters and emails came in - a viewer moved to tears by the beauty of the periodic table; several marvelling at what they had missed in school; a couple quibbled that we hadn’t given due prominence to chemist A or B. But out of the blue came a letter from a teacher: we had ruined the series by consistently using the term atomic weight. Were we not aware that one must use the term atomic mass? How could he show it to his class if we had been so careless?

The producer, not a chemist, was worried: had we committed a major blunder? I confessed to being nonplussed; it had never been a distinction over which I had lost any sleep. I flipped through some textbooks - many use weight. But as I drafted our reply, I realised that I knew very little about the origin of these most fundamental of chemical quantities. 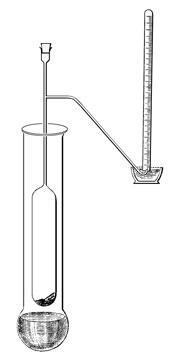 Vapour from the sample displaces air into the measuring tube

The idea of atomic weight goes back to John Dalton. At the end of the 18th century, apart from a few renegades like Claude Berthollet, most chemists agreed that the elements codified by Antoine Lavoisier combined in fixed ratios. The ratios themselves derived from the two classical measurements of chemistry: weight and volume. Dalton’s proposal was that the fundamental units of chemistry were atoms, differing from each other in both chemical properties and in weight. He provided an initial set of values, setting hydrogen as 1. The values in his table, however, were a mess, and the analyst Joseph Gay-Lussac soon picked them apart. Conversion of volume to weight, however, must have been an unpleasant business. Gay-Lussac sealed a weighed quantity of liquid into a thin glass globe that was pushed into an upturned tube of mercury. As the assembly heated on a hot stove, the bulb would break, releasing the vapour, and its volume could be measured. The temperature correction conveniently involved Gay-Lussac’s own law.

By 1826, Jean-Baptiste Dumas, wanting a more flexible method that could be used for materials that reacted with mercury, heated an excess of material in a flask with a bent tapering neck. When the sample had vaporised and was no longer visible, the neck could be sealed off; the weight of the flask led to the density of the vapour.

But Dumas’ concern was that only physicists were determining atomic weights while chemists, too busy making new stuff, were ignoring the issue. It was a ticking timebomb. With no agreement over the composition of their molecules, organic chemists tied themselves in knots trying to write formulae for their compounds. By 1861, August K?kul? could point out that there were 19 distinct proposals in the literature for the formula of acetic acid. Crisis point had been reached.

In 1860, a conference - the first ever - was called in Karlsruhe, Germany, to resolve the mess. Here the Italian chemist Stanislao Cannizzaro begged chemists to open their eyes to Avogadro’s hypothesis of 1811 - that vapour density must reflect the atomic mass of the molecule.

If some chemists dismissed Cannizzaro’s talk as dull numerology, for others it was a revelation. Vapour density quickly became of singular importance for the characterisation of any new compound. But measuring it was hard. It would take a young man, inspired by the new structural chemistry, to change things. 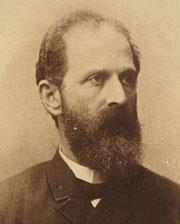 Victor Meyer, born in Berlin to Jewish parents in 1848, studied with Robert Bunsen and gained a doctorate at age 19. At 23 he succeeded Johannes Wislicenus in Zurich, where, amongst other things, he showed that glucose is an aldehyde, prepared and studied nitroalkanes, noticed isomerism in oximes and discovered thiophene in an impure sample of benzene that he was using in a lecture demonstration. He first noticed the effect of steric hindrance on organic reactions, and invented the terms stereochemistry and dipole. When he started investigating the speciation of a variety of organic and inorganic materials, he found that he needed to measure vapour densities. Dissatisfied with Dumas’ method, his approach was to place a glass tube, equipped with a side-arm, into a heating bath. A weighed aliquot of the sample was then dropped into the tube, which was immediately restoppered. As it vaporised, the sample displaced a volume of air that was collected and measured. The beauty was that by heating only the base of the tube, no temperature correction was needed and the determination could be done very quickly.

Meyer, however, was a workaholic. Pushing himself to the limit, he suffered a series of breakdowns. These did not stop him moving to chairs first at G?ttingen and then succeeding his mentor, Bunsen, in Heidelberg. But the strain on his system was too much and in 1897 after leaving a note of apology to his family, he took the chemist’s escape: cyanide. While the chemical community grieved, he had left an indelible mark - his method was already a standard student procedure.

Today, vapour densities are almost forgotten. But, if you’re reading this and snorting about mass vs weight, I think you should chill out. Until the balance finally vanishes, weights will continue to hold their own in our labs.