So what’s the language of organic chemistry, and why does that question matter? If the field were closer to physics, the answer would be easy: the language would be mathematics, which appears (sometimes unreasonably, as Eugene Wigner pointed out) to be the operating system of the universe. But, as many chemists will have had occasion to notice, we’re not quite that precise and elegant. 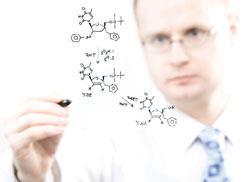 Chemists who don’t share a spoken language can exchange a fair amount of information graphically, but we still need words

That’s not to say that we don’t have our own symbolic language, and a useful one it is: chemical structures, reaction arrows and the like. Two organic chemists who don’t have a spoken language in common can still exchange a fair amount of information just standing at a whiteboard. Well, as long as that information is about reactions and mechanisms, they can: directions to the bathroom and choices for lunch are outside the range of the chemical vocabulary. Many chemists will have had just this experience, especially in graduate school, where students and postdocs from many nations tend to congregate.

As an aside, I achieved one of my greatest cross-linguistic feats in just that environment. I was trying, in my spare time, to pick up foul language and invective in as many languages as I could, and approached a Japanese postdoc about bad words in his language. He couldn’t understand the concept, despite several tries, but then I looked down at the 1ml flask he had on his rotavap and inspiration struck. ’What step is this?’ I asked him. ’Step 23,’ he answered, with deep emotion. ’What if it falls in the water?’ I asked, mimicking the motion. He reacted with horror: ’Terrible!’

’Right,’ I said, ’If that happens, what do you say?’ And I could see comprehension dawn. ’Ah! Those words. Bad words, yes! I understand.’

There are far more scientific concepts that need to be expressed than our structures can convey, however. Reaction schemes still need to be annotated in a working language, verbally or in print. You can show reactions, but showing why the readers should care is harder. Take a look at the graphical abstracts of a chemistry journal. Now try to imagine how many of those papers whose titles you could even come close to guessing from the illustration alone - and then try to imagine writing an entire scientific paper in nothing but pictures. I’d much sooner write it in verse, given the choice, and that’s been done.1

But this subject brings up other thoughts, some practical and some theoretical. A practical one is day-to-day lab communication. I’ve worked in the US with colleagues from every continent except Antarctica, and I’ve been the foreign postdoc myself in a European lab. These experiences make me certain that every lab should have a common working language (presumably that of the country where it’s located), and that it should be the responsibility of every person in it to be able to at least get along with its basic vocabulary. I’ve been told of situations where most members of a lab speak one language, with an odd student or postdoc out, and very important information (such as ’Everybody out, now!’) has not been communicated in the lingua franca. This is dangerous indeed, and shouldn’t be tolerated, no matter whose fault it is.

A more general question is what languages an organic chemist might do best to be fluent in. Ever since the middle of the last century, English has been the first choice, taking over from German, and it remains so. That hasn’t stopped people, though, from wondering if Chinese (especially) or some other language might not be good bets for the future. I’m not so sure. While Mandarin might be a good choice for business reasons, I think that English has too large a following, too large a scientific vocabulary, and too large a legacy in the literature to be dethroned (considering how the literature has proliferated under its reign). These may just be the wishful thoughts of a native English speaker, but I also think that a phonetic language whose alphabet is largely shared by many other important tongues has too many advantages compared to Chinese. However, time will have the last word.