To the unfamiliar, chemists might all look the same. But some common categories are easy to identify, explains Derek Lowe

To the unfamiliar, chemists might all look the same. But some common categories are easy to identify, explains Derek Lowe

Chemists are human. Humans are hierarchical. Therefore...well, therefore, you’ll find a number of different roles and levels for scientists in a drug company’s labs. Here’s a rough ordering, from least experienced to most.

First off, you have the well known ’pair of hands’. A person in this position does basically what someone else tells them to do: run this reaction, via this procedure, with this starting material. Make this list of analogues and come back when you’re finished - another list will be waiting. To be honest, in many organisations, there isn’t a level that’s only like this, or not any more. Routine chemistry is the first thing to get outsourced. There’s a long history for this kind of assistant work (it was the tradition in Germany and Switzerland, among other places), but as a full-time job it’s been disappearing outside of the contract labs.

Next up is a position that might be described as ’pair of hands with elbow room’. This still is an assistant job, but with freedom to tinker with reactions, steps and analogues to be made. With experience, it shades up into the next level: ’Make a bunch of these sorts of structures, and we don’t care how’. Most medicinal chemistry compounds are made in this mode - there’s an active structure or series, and people just modify it with whatever chemistry comes to hand. If they’re fast and effective (and not hideously expensive or foolhardy), no one particularly worries about what the reactions are. The ones that work are the right ones.

As you’d imagine, the next level above that is ’Make active compounds for this whole project, and we don’t care how’. That’s a broader mandate. It involves running a team of chemists, which means making sure that the active compound series are being explored thoroughly and that people don’t get stuck on something unproductive. You’ll need to focus on the details, while keeping in mind the big picture. Diplomacy is needed, too, since you’ll have to tell people to stop working on things that they may be attached to and switch to things that they may not be so crazy about.

The next higher job is ’Run this whole project’, which will definitely keep you occupied. Now you’re not only keeping track of a herd of chemists, you’re also watching the biology end of things, deciding which compounds to advance, coordinating toxicity testing and scale-up, bringing in the formulations group, the patent lawyers, and so on. Diplomacy is absolutely essential; you don’t want any of these people mad at you. One challenge here is to avoid spending all your time delivering presentations - some managers measure their worth by how often they can get you to do that for them. 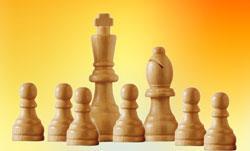 There is a hierarchy within drug discovery

Now that we’re up to project management, the next level is ’Tell us which project we should be doing’. This is a head of chemistry job, the person who has the final word on which projects get resourced in the department (and to what extent). They also have (or at least should have) the last word on whether a project is ready for the development team, or should be scrapped for something more promising. There’s a lot of what’s called ’portfolio management’ here: keeping a mix of different targets, approaches and risk levels so that research efforts are balanced. After all, most things aren’t going to work, this being drug discovery, so you’ll need to handle that gracefully.

Above that, you have similar decisions to make, but across whole therapeutic areas. What diseases should the entire R&D arm of the company be pursuing? What areas are too crowded, or have risks that are too closely tied to the company’s existing efforts? Are some of these things costing too much for what they’re returning? How many compounds will go to the clinic this year - no, not that number, the real number - and can the development people give them the attention they deserve? These are head of R&D (or above) questions, and they can be rather difficult to answer.

So there you have it, from ’make this compound’ to ’run this company’. But in any of these jobs, remember: if you find yourself with lots of free time, you’re doing it wrong.