Peter Vandenabeele of the University of Ghent, Belgium, and colleagues at the Catholic University of Leuven, Belgium, and the Institute for Chemical and Applied Spectroscopy in Dortmund, Germany, have examined the  Breviarium Mayer van den Bergh, an illuminated manuscript made in Flanders around 1500AD, using a combination of micro-Raman spectroscopy and total reflection x-ray fluorescence (XRF) spectroscopy. 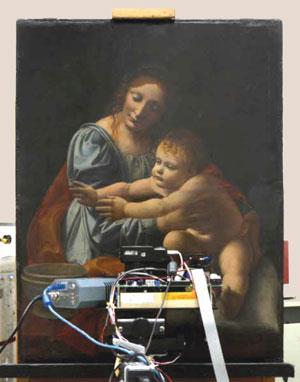 XRD can show who painted what

The team identified several pigments. Azurite, a copper complex, and lapis lazuli were used for blue. Vermilion provided the red, red lead and massicot (two lead oxides) were orange, while green was formed from copper sulfates and malachite (copper carbonate-hydroxide).

The results, when compared with those from attributed works, identified Jan Provoost as one of the artists involved.

Ed. XRF is a non-invasive technique still widely used in the art world. For example synchrotron radiation-induced XRF allowed Joris Dik and colleagues at Delft University of Technology, the Netherlands, to recreate a hidden portrait of a peasant woman underneath the van Gogh painting  Grasgond  (1887) (see  Chemistry World, September 2008, p4). Also the Californian company InXitu, together with the Getty Conservation Institute, have developed a portable XRD (x-ray diffraction)-XRF instrument (based on NASA technology) which has been used in the study of many works of art (G Chiari, Nature, 2008, 453, 159).