An evening of music composed by chemists was presented by Leicester University in conjunction with the East Midlands Section of the RSC. The event included the world premier performance of Votocek’s Serenade for horn and string quartet. The Czechoslovakian composer’s unperformed pencil written score of the serenade was brought over from Prague and performed by UNI-PART (left). Elgar’s Serenade for strings  and Borodin’s String quartet no 2  completed the evening’s entertainment. 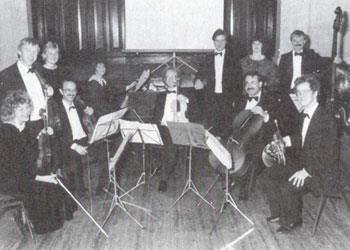 Mahadev Kumbar of Nassau Community College, Garden City, US, has published several papers in which he explores musical aspects of chemical reactions - he works from rate equations which he converts using a Fourier transform algorithm into frequency and amplitude information, which is then converted into musical notes. For more information and the opportunity to listen to chemical reactions see Chem. Eng. News, 2006, 84, 98; J. Chem. Educ., 2007, 84, 1933.