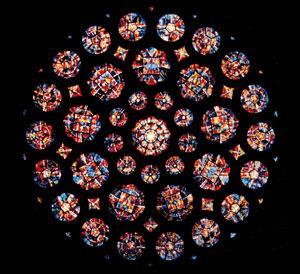 The gift of the stained glass window, designed by Alan Younger, marks the centenary in 1988 of Laporte, the Luton-based international speciality chemical company. The 30-foot diameter window is made up of 18,000 separate pieces of glass within 64 lights, and took two years to execute, at a cost of ?75,000.

German chemist Bernard Laporte formed the company 100 years ago to manufacture hydrogen peroxide which he used to bleach straw boaters, much in vogue at the turn of the century. Over the years Laporte diversified into a range of bleaching and commercial laundry products. Now claimed to be the second largest independent chemical company in Britain, it produces a wide range of chemical products for the building, water treatment, textile, electronics, pharmaceutical and other industries.

Ed. The musical work Canticle of the Rose was specially composed by Alan Ridout for the unveiling of the Laporte Window, the fanfare which concludes the final movement being played at the moment of unveiling.

In December 2000, Laporte was bought by the German chemical company Degussa-Huels for ?1.36 billion.