The most extensive remains of the alum processing industry in Europe have been uncovered at Ravenscar on the North Yorkshire coast. The National Trust is carrying out a 3-year archaeological project at the Peak Alum Works, which was used to manufacture alum (aluminium potassium sulfate) from 1650 until 1862, when alum was replaced by cheaper synthetic materials. 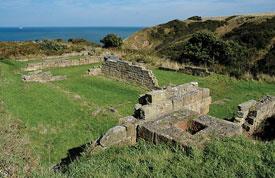 The Trust bought the site in 1979, but the size and significance of the ruins were only recently discovered by some of its volunteers.

The Peak Alum Works - often called the site of the world’s first chemical industry - produced alum for fixing dyes in the textile industry, tanning leather, fire proofing and the manufacture of parchment and candles. The raw material for alum was shale, which was quarried and roasted in mounds. After leaching in large tanks of water, it was boiled out and mixed with either burnt seaweed or urine. Alum crystals were produced on cooling the leachate.

Ed. Visitors can now visit the National Trust Coastal Centre at Ravenscar and walk from there to the site of the Peak Alum Works. There are numerous interpretation boards on site which fully explain its significance. The industry provided jobs for hundreds of workers.

Urine used in the process was collected by children from local families who would leave out a jar on their doorsteps - as the industry expanded the urine was shipped in from Newcastle and London.