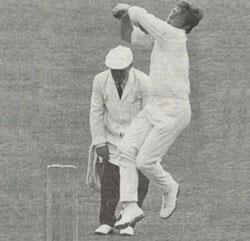 Bob Woolmer with Sorbothane in his boots

Faced with the problem of finding a material capable of absorbing a large impact of energy, Maurice Hiles has taken as his model Mother Nature’s solution to this problem - flesh - and come up with a polyurethane-based polymer which distorts on impact, absorbing a large proportion of the impact energy, and then dissipating the energy over a period of time dependent on the formulation.

This polymer, recently launched as Sorbothane by NRDC and BTR Ltd, may be regarded as a quasi-liquid behaving a as a molecular spring. It exhibits both the dimensional stability of a solid and many of the hydraulic characteristics of a fluid.

The energy-absorbing properties of Sorbothane have led to its use in isolating the counterbalances in high-fidelity pickup arms, and as a sound-damping material in office machinery.

It has also been studied at the Clinical Research Centre where an energy-absorbing shoe has been developed for treatment of ’heel strike’, associated with osteoarthritic degeneration.

Sorbothane insoles are being tested in footwear used by cricketers - especially to absorb the impact experienced by fast bowlers in their delivery stride.

Ed. Sorbothane insoles are now extensively used in sports footwear for golf, cricket, rugby, athletics, football, raquet sports and hiking and walking. It has also found a variety of other uses which take advantage of its shock-absorbing properties. For example, Sorbothane was used to protect the Liberty Bell when it was moved in 2003.