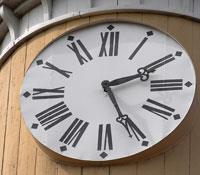 Roman numerals - good for clocks, not so good for journal titles

What is the largest number of papers published in a numbered series with a common title? I have found a paper numbered CDLX in a series Studies on the synthesis of heterocyclic compounds published under the senior author T Kametani in Journal of Organic Chemistry in 1972 (37, 1450). Paper 715 in this series appeared in 1977 in the same journal (42, 3040) with the same senior author. Crude arithmetic informs one that Kametani was publishing about one paper per week.

Kametani published 63 papers from his mammoth series with the Chemical Society/RSC. Although a distinguished chemist, he was no expert in Roman numerals. He submitted his 400th paper in the series to J. Chem. Soc. in 1971, calling it Part CM, assuming M to be the Roman numeral for 500. Other papers in his series have erroneous numbering and so the number of papers he published may be an overestimate. Fortunately he changed his numbering from Roman numerals to Arabic ones around Part 650 - before he could reach Part MDCCCLXXXVIII (Part 1888, which is the longest Roman numeral without multiple M’s). His highest numbered paper in this series published with the RSC is Part 878 published in J. Chem. Soc. Perkin 1 in 1981.