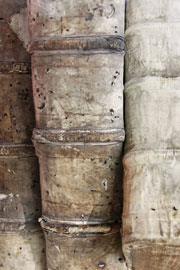 Journals can be a tasty dish for moulds and insects

Through many years of living in the tropics and subtropics, I have made an interesting discovery. Helvetica Chimica Acta  is never attacked by moulds or cockroaches, J. Am. Chem. Soc. is rarely attacked, but J. Chem. Soc. is always readily devoured by cockroaches and moulds. You can interpret this as meaning that the J. Chem. Soc. is a tasty dish or a mouldy old journal depending on your point of view. The attack occurs down the spine and it is presumably the glue used in binding that is attacked.

From a letter from a South African reader in  Chemistry in Britain (June 1979).

Ed. The general manager of RSC publications responded to this letter with the information that  Helvetica Chimica Acta  indeed used synthetic binding adhesives, while J. Chem. Soc. Perkin  and J. Chem. Soc. Dalton  were bound using animal glues, though these contained additives designed to dissuade termites and other ’nasties’.

Another letter later in 1980 made the point that even when synthetics glues containing fungicides are used, diffusion of liquid water in hot conditions can lead to mould growth, unless the fungicide can also diffuse. Insect attack, on the other hand, can be reduced by use of an adhesive such as polyvinyl acetate. Under conditions of high humidity, additional protective packaging must be applied to journals in storage.

Of course nowadays for jounals to ’biodegrade’ would been seen to increase their green credentials. Perhaps in addition to Impact Factors, journals should quote Biodegradability Factors - the higher the better!