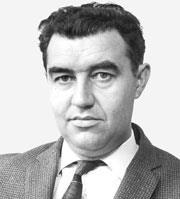 Bill Abbotson - the man behind Oasis foam for flower arrangement

Bill Abbotson is a man who reckons he has explored nearly every possible use for polyurethane foam and numerous licensees of his firm, Tangent Foams Ltd, are profiting from his marketable developments.

Abbotson, a Manchester University graduate in chemistry, has been associated with various aspects of the development of polyurethane for 20 years, ever since joining the ICI research team that successfully developed dimethyldiisocyanate, its basic raw material. On leaving ICI, he went to South Africa where he developed uses of foam for heat insulation - it is 30 per cent more efficient than polystyrene.

Back in Stockport, two years ago, he put all his energy into Tangent Foams. The firm’s bread and butter comes from the furniture market - a field in which polyurethane has revolutionised chair design and comfort - but Bill also produces realistic looking plastic antiques, for example Regency panels and oak beams, down to wormwood holes and dark-stained finish. Plans for the future include the commissioning of an original carved oak panel and marketing foam reproductions of it for instant antique interiors.

Ed. Abbotson’s biggest claim to fame was his part in the development of the water absorbing foam, Oasis, that revolutionised floral design.

During his time in South Africa, Bill became passionate about rugby football and later became treasurer and eventually president of Fylde Rugby Football Club. Bill Abbotson died on 14 March 2009 after a long illness.