A doctor finds cultural common ground with the Doctor 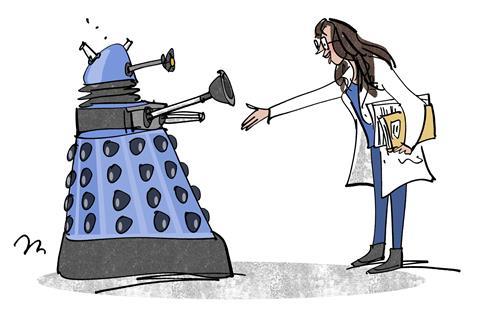 I had always known I was going to leave Italy at some point. The UK was my dream. In high school, I had studied British literature (oh, Wordsworth’s dreamy daffodils!) and when I visited London, it was love at first sight. I went back on multiple occasions; I loved the chaos, the crowds and the multicultural environment.

I was ecstatic and proud to move to the UK to start a PhD in chemistry. Except, this time I was not going to London. How was I supposed to know that the rest of the UK was so different? York is a beautiful, small city revolving around tourists and undergraduates, but it did not seem to have a place for me. Or, at least, that was my initial feeling.

And I was no longer going on a holiday. I was about to start a professional journey, where my worth would be measured according to my papers and my research outcomes. Or, at least, that was what I had learned in Italy.

On top of that, while my language skills were good enough to start a PhD (I passed a compulsory test), they were not enough to understand British accents, particularly thick northern ones.

For the first few months, I stayed quiet during the office social events every Friday: I had no idea what they were talking about. Even when I grasped a few words, I could not understand the context; what I had studied in school was not coming in handy. Daffodils are beautiful, but they don’t make much of a conversational topic.

I knew basically nothing about modern English culture. I had never watched an episode of The Great British Bake Off, and all I knew about politics was the existence of the two major parties. I was a fish out of water.

My first response was to do what I had been taught: I threw myself into the lab. I worked long hours and weekends, and turned down all the invitations I got for social events before 8pm. Little did I know 8pm is quite late in the UK, and not much happens after that.

But little by little, I started to break into that wall, and Dr Who was my precious chisel. Watching the show helped me grasp more of British culture – the importance of a hot beverage, the famous British humour, the food (but not the Doctor’s fish fingers and custard). It was also an evergreen conversational topic; everyone would share their favourite episode or ‘fight’ over their favourite Doctor. Matt Smith will always be mine. Mid-morning coffees discussing the latest episodes became a beautiful habit.

However, I was still very lonely. I knew people, I had colleagues and flatmates, but I was missing that way of sharing life that is typical of my culture – eating together, planning together, hugging each other and most of all, sharing my feelings. Making proper friends was so hard and took so much more effort than I expected. At the end of the first year, I broke down in tears after someone simply asked ‘How are you?’

That made me recognise that something was wrong. Very slowly – and thanks to a department and a supervisor that always put people and their mental health first – I assimilated the idea of work–life balance. And that, my dear UK, was the best thing you have taught me!

It took months to sink in, but finally, shortly after two years, I learned how important it is to have some me-time. I joined a gym and an Arabic class, and found friends in the process. Not only I could do things that were good for me, I could finally force myself to leave the office.

At the same time, I explored new interests and became part of a science comunication team, finding out that I loved to write about science. A whole new career path opened up because I learned how to take a break.

Finally, I was happy. I made tons of friends, I found things I loved and I was still productive. As the cherry on top, a Neapolitan pizzeria opened in the city centre. There was a place for me in York after all.

Then my PhD journey ended, and I had to start again. Somewhere else.

I moved to the US earlier this year, and I was not alone this time. I had a partner, and it made things easier. However, two months in, Covid-19 struck, so I have had to experience American culture on my sofa, through Twitter and Netflix.

It’s the Doctor Who situation all over again, but this time the Fab Five from Queer Eye are giving me a cultural makeover!