The likes of language and glove discussions

I can sympathise with Derek Lowe in his discussion of the questions faced by medicinal chemists when deciding how to proceed when optimising a lead compound. I worked for a period in an industrial medicinal chemistry group, and would sometimes work through a linear series of derivatives to find the optimal compound. It seemed inevitable that the series of methyl, ethyl, propyl etc would always lead at some point to the futyl analogue [sic].

Back in the 1980s, I had an interest in using cluster analysis to identify a smaller number of analogues with respect to various physicochemical parameters of substituents. This indicated groups that were similar, homogeneous within the group and, as much as possible, heterogeneous to other groups.  I can’t recall that the approach generated any more success than the wild-blue-yonder ideas referred to by Derek, but at least there was some logic involved.

Regarding the letters from Mike Green and Michael Harris on the effectiveness of chemistry graduates, in my experience of interviewing UK chemistry graduates over the past 30 years there has been a steady decline in their grasp of the fundamentals of the subject.

This has been coupled with an alarming drop in standards of literacy. Some of my Swiss colleagues are puzzled by graduates’ choice of language, such as using ‘is’ instead of ‘are’ as the plural of the verb to be, and the misuse and abundance of the word ‘like’ in all speech. There are many other examples of verb confusion and poor grammar. Indeed, we frequently interview candidates whose mother tongue is not English with far superior spoken and written English to native speakers.

I left the UK years ago because I was struggling to bring up a young family on the low pay for chemistry postgraduates available at the time. Looking at the starting salaries offered in the back of Chemistry World, I wonder why anyone would seek a career start in chemistry in the UK. Scientists are valued in Germany and Switzerland, enjoy a better lifestyle and are much better rewarded for their efforts.

As a doctoral student in global health, and being a native of sub-Saharan Africa, I was very interested to read Dinsa Sachan’s article on new microbicide products to prevent HIV infection in women.

The article made me vividly remember the demise of my maternal aunt who, in a polygamous partnership, was a victim of the scourge of HIV/Aids in Uganda during the 1980s. Her life and that of other countless women in such a predicament could have been saved if they had an option to protect themselves against HIV.

Uganda is now hailed globally as a success story in the fight against HIV/Aids. For those interested in Africa’s development, funding HIV microbicides would be the most expedient way to go.

The gloves are off 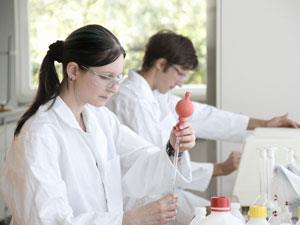 Our choice of photo inadvertently provoked a lab safety debate on Twitter.

@SellaTheChemist: If students are doing an aq titration then what do they need the gloves for? What is the hazard they are being protected from?

@PJCoyle: If they are titrating water, there is no need to wear gloves, except that it is good training.

@SellaTheChemist: I disagree. Our view is that PPE comes last. You need to take other steps first to minimise risk.

@PJCoyle: Engineering controls first preference. How do you engineer out spills in open lab equipment? If no open containers or devices, you do not need gloves. But if lab coats and safety glasses are required, so are gloves.

@SellaTheChemist: Dogmatic approaches to safety are notorious for not working. And we must always take risk compensation into account and use a matrix approach to make judgements. Generating tonnes of waste for no actual benefit is pointless.

You can read more of Patrick Coyle’s views on his blog.