Combining surfing and science to understand more about our microbiome

When Clifford Kapono’s PhD supervisor called him in for a meeting one day, he wasn’t sure what to expect.

‘Explain this,’ said Pieter Dorrestein – professor at the Skaggs School of Pharmacy and Pharmaceutical Sciences at the University of California San Diego in the US – turning round his computer screen to display photos and articles featuring Kapono in the surf.

At first Kapono was worried he was in trouble. Perhaps his supervisor wasn’t happy about time spent surfing rather than science-ing? But actually, Dorrestein was excited to see Kapono’s passion and wanted to explore ways for him to combine his two favourite pastimes: to swap the wet-lab for the waves.

‘That’s when everything changed for me,’ says Kapono. ‘It was the first time that a mentor was okay with stepping outside of just the mission of the grant, or the mission of the lab. It was really taking a passion and integrating the science into [it] in that way.’

Growing up as an Indigenous person on the eastern shores of Hawai‘i, Kapono sometimes didn’t feel part of either the scientific or surf community.

‘There were times when the doors were shut in every component of what I’m doing now … [including] being told that I wasn’t going to perform to a level which would be acceptable in the scientific community,’ says Kapono.

He was also told that he wasn’t marketable as a surfer, an idea that Kapono believes to be rooted in the ‘cultural marginalisation’ of surfing in Hawai‘i, due to periods in Hawaiian history where only non-native people were permitted to surf.

‘It’s difficult to shake that intergenerational trauma over the years. So, you have the generations above me being told surfing won’t get you anywhere – then it’s perpetuated. And I feel within the older generations, they were led to believe that speaking Hawaiian, surfing, doing things Hawaiian, weren’t necessarily going to allow you to contribute on a global level,’ he explains. ‘What’s funny is our generation now believes very much that having an Indigenous perspective is highly valuable and impactful on a global level.’

When Kapono won a research grant from the University of California’s Global Institute of Health to support him to merge his science with surfing, he was delighted. ‘I don’t know if it gave me a confidence, but it gave me almost a sense of relief. Like I’ve been trying so hard to just be heard, but I felt that the voice of myself and my people were being silenced. And I don’t know if that’s true or not. It’s just what I was feeling.’

The grant supported Kapono’s final two years of graduate school and an international surf trip where he was able to establish a new citizen science programme.

Travelling to different surf communities, Kapono set out to explore the microbiome of surfers and to understand differences and similarities in the gut bacteria of people who spend so much time in the ocean in different locations around the world.

Kapono’s data acquisition techniques were a little different to those employed in the lab. On arrival in a new field location, he would surf for a week or so, get to know some of the local surfers and build up trust before asking them if they would be willing to participate in the Surfer Biome Project. Using sterile swabs, samples were taken from the faces, hands, ears, belly button and feet of participants, who were then asked to provide a fecal sample.

Each surfing citizen scientist also answered questions about the bathing products and sunscreen they used and details of any medicines they were taking. 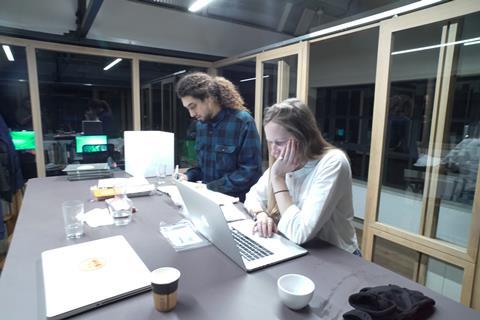 It not all sun, sea and surf – there’s also labwork to be done

Back in the lab, Kapono used mass spectrometry on the samples to identify chemical profiles for each surfer and classify the compunds present due to their choice of bathing products, pollutants in the ocean and the types of bacteria living in and on each individual. Using an open-access tool called GNPS, Kapono could compare the fragmentation patterns observed in his mass spec experiments to visualise similarities between the molecules and microbes in his samples and identify the classes of substances present.

For Kapono – who has now graduated from his PhD and lives and works in Hilo, Hawai‘i – one of the most exciting parts of the project is the emails he receives when he shares data with the ‘strangers’ who go from ‘surfers to scientists with a couple of Q-tip swabs’.

‘They’re always asking “What about this? And what about that?”’ he says. ‘It’s just so fun to be able to communicate science to people who never thought that they were good enough to understand it.’