My boyfriend sweeps away one of my regular attempts at incorporating chemistry into our everyday conversation with his hand, as if sweeping hair from his face, and continues to question why his car battery has chosen today (at -2?C) to fail. A perfectly reasonable explanation is not what he is looking for - more an excuse to grumble. Little does he know that the simple chemistry behind combustion reactions and batteries provides a perfectly adequate explanation as to why his car has failed to start on the coldest day of the year so far! 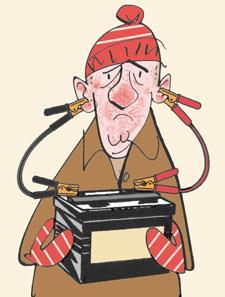 When he turns the key in his car’s ignition, two crucial chemical reactions are initiated. The first occurs across the terminals of the battery, for example, in a lead-acid battery:

This provides the kick-start for the second reaction - the combustion of petrol or diesel, which is responsible for producing the actual power of a car (his car is quite small, so not an awful lot is required!). Burning of fuel in air produces massive amounts of energy in the form of expanding gas. The increased pressure from the expansion is used to move a piston, which drives the rest of the engine (the details of which, I think, are best left to the mechanics) until eventually the wheels start to move and his journey to work can begin.

Basic thermodynamics can explain why low temperatures affect the efficiency of these reactions, and hence the failure of his car to start. It is fate, however, which determines that this specific day happens to be the one on which he really does not want to be late.

The activation energy for any reaction is the energy required over and above that possessed by the reactants to stimulate successful reaction when the molecules collide. A higher temperature means that a greater number of molecules possess kinetic energy greater than this activation energy than at a lower temperature. Thus when the temperature outside is -2?C, very few reactant molecules will have enough kinetic energy to react when they collide with each other. It is rather like getting lots of people out of bed at two o’clock in the morning and demanding them to socialise - I would expect their energy levels to be far too low to get any further than a measly ’hello’ before returning to their duvets.

Interestingly, thermodynamics is also one of the reasons that developing a car which runs on water has proved to be such a challenge. In an ideal world it would be wonderful to fill up a car for the same price as taking a bath - but again a brief consideration of the chemistry shows why this is unrealistic.

A hydrogen fuel cell works on the principle of hydrogen reacting with oxygen in the presence of a catalyst to form water and release energy in the form of electricity.

Hydrogen, although highly abundant, is extremely volatile and not convenient to store. Water can be converted into hydrogen and oxygen by electrolysis and used in the fuel cell directly, overcoming the hydrogen storage dilemma.

Unfortunately, the energy required to split water into its constituent parts will, by definition, be greater than or equal to that required for the reverse reaction (give or take a few kilojoules per mole), hence the idea of powering a car using a garden hose is still a fantasy.

So next time a non-chemist loved one grumbles that ’it always happens to me’, try consoling them with a few simple reaction profiles... I am sure it will make them feel much better about missing that ever-so-important meeting!