A G Stromberg, first class scientist, second class citizen : letters from the Gulag and a history of electroanalysis in the USSR 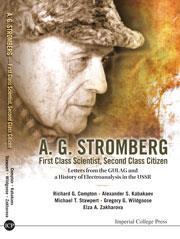 Armin Stromberg was born of German ancestry and brought up in Yekaterinburg (later renamed Sverdlovsk), a city in central Russia.

When the USSR entered the second world war, it viewed these ’German’ people as possible enemy sympathisers. They decided to reduce the perceived threat by translocating the men folk to where they could be constantly supervised. In Stromberg’s case it was incarceration (disguised as ’conscription’) in a forced labour camp, a brick-works, in Nizhini Tagil, about 80 miles to the north.

Conditions were hard and half the 6000 inmates died during their period of internment, which in many cases continued for years after the war had ended. Stromberg survived because he fortunately was allocated the job of foreman which then led to the less arduous position of quality control officer.

Almost 200 pages of this book consist of the 74 letters he wrote to his wife and daughter during the 18 months of his separation. The tone attempts to be reassuring but nevertheless there are repeated descriptions of how he attempted to deal with the persistent, biting cold and the ever-present hunger. Even potatoes were a luxury.

Stromberg’s fortunes changed in September 1943 when he was inexplicably released and directed to resume his work as an electrochemist in the Sverdlovsk Industrial Institute. There he developed an interest in polarography, a technique then in its infancy. Later he was transferred to the Tomsk School of Electroanalysis and here he concentrated on the polarographic offshoot, anode-stripping voltammetry.   His fixation with this technique, though at the time laudable, probably held back his laboratory from diversifying into new and more fashionable (and ultimately more rewarding) areas of research.

Stromberg retired in 1985 and in 1992 he was formally rehabilitated into full Russian citizenship. Sadly, perestroika brought with it a period of rampant inflation and Stromberg’s savings became almost worthless. As in the Gulag half a century earlier, he didn’t complain but simply made the best of it.

This is a moving biographical account of what it was like to be a scientist in wartime Russia and be victimised because of Soviet xenophobia. The book is somewhat expensive, but I recommend it.