Have you ever thrown a supposedly respectable broadsheet clear across your living room after reading yet another piece of science journalism that plays fast and loose with the facts? Or have you seethed at the questionable claims and quackeries of alternative therapists? Of course you have. And that’s why you’re going to love Ben Goldacre’s new book, Bad science  . Here, as in his Guardian  column, the good doctor takes on all manner of pseudoscientific bunkum. 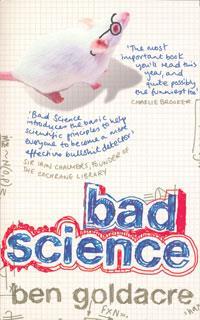 The book begins with a short introduction to the scientific method via a look at ’ear candles’ and other forms of ’detox’. Then Goldacre pummels the cosmetics industry before giving homeopaths, nutritionists and the vitamin supplements and antioxidants industry a thorough thrashing. Their claims are rapidly examined and wittily debunked. The pharmaceutical industry too gets it in the neck for suppressing negative trial data. However, there’s disappointingly little on the failings of government regulators that have, for example, allowed dodgy drug ads to appear in medical journals.

The chapter on the wonders of the placebo effect is excellent - I was fascinated to learn, for instance, that not only can sugar pills help to heal stomach ulcers, four sugar pills work better than two.

But it is the media that has truly provided Goldacre with an embarrassment of riches - over 500 of his Guardian  stories have examined newspaper articles that have ignored or misreported scientific evidence. In his chapter on ’How the media promote the public misunderstanding of science’ Goldacre blames the ’humanities graduates’ who run the media and wear their ignorance of science ’as a badge of honour’ for the dire state of science and health reporting. Here, I believe Goldacre risks alienating a big tranche of readers who would otherwise stand to benefit most from his book.

Nonetheless, as the book concludes with a look at the MRSA and MMR scares, it’s difficult to disagree that the mainstream media has, at times, propagated some dangerous nonsense.

And the solution? Not the ’indulgent and well-financed’ public engagement with science community, which has been ’worse than useless’. Instead, Goldacre notes that ’The process of obtaining and interpreting evidence isn’t taught in schools, nor are the basics of evidence-based medicine and epidemiology, yet these are obviously the scientific issues which are most on people’s minds’ and he calls on scientists of all stripes to start their own blogs. By providing a source of ’good science’, you can help to stem the impact of the bad.