At the heart of the matter

In 1953 Stanley Miller, a student under Urey, published a startling observation: under the influence of an electric discharge, a simple mixture of methane, ammonia and water vapour spontaneously forms amino acids, among the most fundamental of life’s building blocks. Coming just a few months after the discovery of the DNA double-helix, Miller’s publication was met with such enthusiasm that it was described on the front page of the  New York Times . Surely the answer to the eternal question of life’s origins was just around the corner? Fifty-five years later, that early optimism seems delightfully, and woefully, na?ve. But have we made no progress at all? In   Origin of life: chemical approach  Herdewijn and Kisakurek have collected together 25 impressive chapters reviewing our understanding of this most fundamental question. 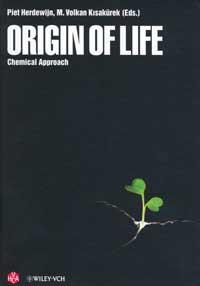 Miller, and his longtime prot?g?, friend and collaborator Leslie Orgel, both passed away in 2007, so an overview is particularly timely. Origin of Life, which is dedicated to the memory of these two giants, is just such a review. Five dozen authors, noted experts in their fields, review the many theories that have been floated to describe both the prebiotic chemistry that set the stage for the origins of life, and the chemical events that led to the first self-replicating, evolving system.

The chemistry of the origins of life is necessarily defined quite broadly, as even after nearly six decades the field appears frustratingly far from a definitive picture of life’s origins. But hints as to the answer, intriguing potential prebiotic chemistries, and more, or perhaps less, plausible routes from abiotic chemistry to life are all presented in their gory glory and detail.

Key questions, such as whether genes preceded metabolism, the chemistry of the first self-replicator, and the origins of the homochirality that dominates life today are, if not definitively answered, raised, examined, hashed out.

The editors have done their job in keeping their multitude of authors speaking with a common voice and a steady depth, and done an equally fine job of balancing opposing views. This latter issue reflects no small accomplishment: by and large every theory touching on the origins of life has at least as many vehement detractors as fervent supporters.

Is the book perfect? Of course not. It is, for example, nearly, but not quite completely, exhaustive. Graham Cairns-Smith and his theory placing self-replicating clays at the heart of the matter receive only scant mention. And there is no sign of Steve Benner and his theory as to why the pentose ribose may have dominated prebiotic chemistry.

Finally, some valuable perspective would have been added by an epilogue outlining the many open questions raised by the science described. Not least of which is whether, given another 55 years, we are likely to yet understand from whence we came.