Atomic – the first war of physics and the secret history of the atom bomb, 1939–49 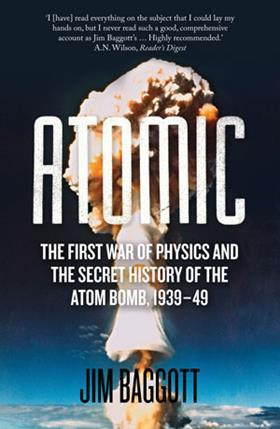 The Allies’ atomic weapons program, the Manhattan Project, has received many popular and detailed accounts. However, Jim Baggott, supported by his 22-page time line in Atomic, aims to describe the competitive actions of several countries in what became a race involving the UK, Canada, the US, Germany, the USSR, (and even Norway up to June 1940). Despite Einstein’s warnings in 1939, and the information supplied by the UK, America was slow to recognise atomic energy nationally. Reports from the obscurely named Maud committee prompted the British Tube Alloys project in September, 1941, supported by several scientists ejected by Germany. Only in 1942 was there a vast US transformation of financial, industrial and scientific resources, reinforced by the British contingent; ostensibly German pre-emption was feared.

Russian bomb research stalled between 1941–1943, though intelligence and material was still transmitted by John Cairncross, Klaus Fuchs and others. In Germany, distinguished scientists including Heisenberg were involved but, as transcripts show, the bomb was regarded as out of reach rather than too immoral a weapon – rocket research received higher wartime priority.

Baggott’s valuable list of key characters gives a brief summary about each of the 200 relevant scientists, spies, military personnel and politicians involved in this story. A set of clear black-and-white photographs illustrates the scientists, from Meitner to Sakharov, and there are notes for each chapter. Baggott is a formidable chemical science writer with appreciable academic and industrial experience. Atomic provides a popular but informed and compelling account of the international competition to produce atomic weapons. Personal details of the principals are not neglected. Baggott ends with a contemplation of the US and Russian (let alone other) nuclear arsenals and expresses the continued need for vigilance.