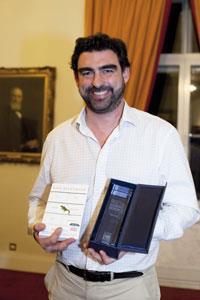 In his book, Nick Lane (above)charts the history of life on Earth by describing the ten greatest inventions of life, based on their historical impact, their importance in living organisms and their iconic power. For a full review of this book by Graham Cairns-Smith see Chemistry World, July 2009, p63.

The other shortlisted books (each author received a prize of ?1000) were:

Previous winners of the award, which has been running for over 20 years, include Richard Holmes, Bill Bryson, Stephen J Gould, Roger Penrose and Stephen Hawking.