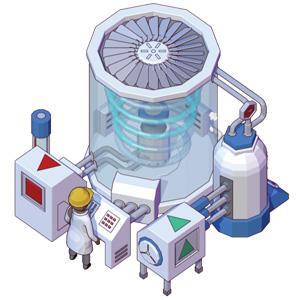 My factory is crammed, every inch of floor space occupied. Strange green powder is pouring in through a hole in the wall, whisking its way to machines manned night and day by diligent cartoon chemists. These are my workers, zombies clad in white coats and hard hats, ever-smiling and never tiring, surrounded by the ridiculous spaghetti of conveyor belts that make me money.

These belts are the very essence of Big pharma. At its core, the game is an elaborate jigsaw puzzle, asking you to weave production lines between different apparatus. Each piece of industrial kit affects a drug’s concentration, condensing it up or dissolving it down. The aim is to hit the sweet spot in the concentration range, producing a drug that works with minimal side effects. Get the order of the machines right and you make money. Get it wrong and it won’t sell or – worse – the cost of manufacture will outweigh your panacea’s market value.

At the game’s easiest setting, tasks range from hiring Indiana Jones-styled explorers (admirably all women) to go bioprospecting, inventing new tech, and untangling the maze of factory processes you’ve created to deliver a final product. Tougher scenarios require judicious use of patents to protect your intellectual property, considered formulation changes, and even a spot of corporate espionage. Profit is the name of the game at all levels, with the greatest margins often found by producing shoddy treatments riddled with side effects, or abandoning production of a life-saving heart treatment in favour of a more lucrative pile cream.

Whether you engage with these ethical questions – trying to make the best drug possible or gleefully squeezing out every penny of profit – will determine how much you get from the game. Unlike classics of the management simulation genre such as Theme hospital, at no point does the game force you to face the consequences of your choices. You’ll never see a patient group push for cheaper medicines, a regulatory inspection of ever-expanding medical sweat shops, or the result of your casual exploitation of natural resources. Success or failure is measured in lucre, not lives. Behind the charm of its aesthetics and simple interface, Big pharma is just another one of countless management sims, more about connecting dots than good manufacturing practice.

If you’re looking for a fun, factory-based balancing act then Big pharma will hit the spot. Just don’t expect any similarity to the real thing.