Chemistry as the good guy 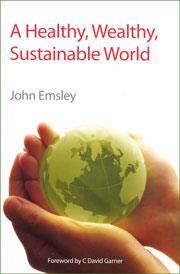 This book reflects two major premises. One is that we face a major crisis because of the way humans have been using the world’s resources in a way that is totally unsustainable. The second is that although this is a major problem, there is hope, and much of that hope centres on chemistry. This is an important message. Of course chemistry is neutral, and sometimes its applications have caused damage to people and places. Yet its successes often go unnoticed, and the prospects for future prosperity are dismal without it.

Emsley’s book is divided into chapters according to major areas of application of chemical sciences: food, water, health, fuels, plastics, cities and sport. Within each of these contexts, a case is made for how chemistry can make a continuing major contribution to maintaining and developing standards of living for present and future generations. Emsley discusses what has already been achieved, what is under development, and what chemists can reasonably hope to aspire to. However, he points out how such aspirations depend upon a continuing flow of gifted young people into the chemical sciences.

A key theme in the book is that despite the bad press often given to ’chemicals’, especially those judged not to be ’natural’, chemists have already done a great deal to help people become healthier and safer, as well as having increasingly sophisticated ’kit’ to house and clothe, and increasingly entertain, us.

The volume is packed with facts, and although the themes will be familiar to chemists, Emsley is relentless in supporting his argument with engaging and relevant examples: including some rather obscure and bizarre ones. It is a rare reader who will not learn something from this book. However, the writing style is designed to make the book accessible well beyond the already-converted. This book is highly recommended for chemists who will enjoy its breadth. However, it would make an even better present for those misguided enough to see chemistry as inherently a ’bad guy’ in the environmental context; and perhaps even more importantly, for those still young enough to be making up their minds.