The essentials of chemical thermodynamics

The essentials of chemical thermodynamics 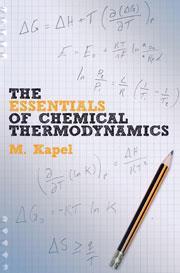 Kapel has set out to present the bare essentials of chemical thermodynamics in the style of a handbook. He has also tried to avoid the ’conceptual and mathematical difficulties that beset the more traditional approaches’. His success in the former of these aims has not been matched by that in the latter.

The bare essentials of the subject are indeed covered clearly and succinctly. What is most pleasing is that, after the first few chapters, the approach is somewhat different from many other treatments. However, the style does not depart all that strongly from what one might expect in an abbreviated textbook.

All the subjects that one would expect in a volume of undergraduate chemical thermodynamics are covered, plus one or two that you might not expect. Despite its brevity, the treatment is sufficient for an undergraduate with enough mathematical prowess to gain a high level understanding of classical thermodynamics. The brevity extends to the diagrams: both of them. One is especially disappointing and I wonder if they are necessary at all.

Kapel has tried to avoid some of the complexities of the subject. Certainly, the concept behind statistical thermodynamics is treated briefly and neatly using a pack of cards as an analogy. On the other hand, the mathematics in the bulk of the book might be considered challenging by many undergraduate students currently reading chemistry. A three page appendix on partial differentiation is likely to be of less assistance to many readers than the comprehensive index.

Although the content is generally well planned and developed, the layout of the book, especially in terms of the equations, leaves something to be desired. Kapel, however is to be commended for producing a brief, alternative, chemical thermodynamics textbook that undergraduates at all levels could find useful.