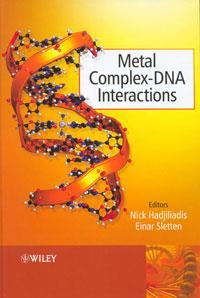 The clinical success of (billion-dollar) platinum-based anti-cancer drugs, which currently account for some 6 per cent of the total sales of anti-cancer drugs, has focused attention on the mechanism of DNA platination and the structures of adducts, since DNA is a key target site. In particular it has become clear that the conformational changes induced in DNA by platination depend not only on platinum itself but also on the ligands to which it is bound, and ultimately probably determine the anti-tumour potency of the complexes and spectrum of biological activity.

The success of platinum has led to a widening of the field. Why not complexes of other transition metals? Perhaps their design can be based on an understanding of how biological activity is correlated with induced structural changes in DNA. An interesting new strategy is the targeting of telomeres at the end of chromosomes (chapter 7), which are rich in TTAGGG repeats. These repeats form G-quadruplex structures. Square-planar metal complexes can stabilise G-quadruplexes and inhibit the action of the telomerase - an enzyme which maintains cell proliferation.

Hadjiliadis and Sletten, themselves experts in this field, have assembled a very interesting set of articles, most of which are centred on the specific interests of the authors without attempt to review the field comprehensively. The 18 chapters cover the thermodynamics (structure) and kinetics of DNA metallation, medical applications (including platinum anti-cancer drugs, and photodynamic therapy), as well as the design of metal complexes as intercalators, groove-binders, and enzymes for DNA cleavage. The toxicological aspects are also covered for mercury, chromium and arsenic.

The book is well presented, although the colour figures for all chapters are grouped together as a series of plates covering six pages in the middle of the book. A specialist book such as this is too pricey for purchase by individuals, but an essential part of the library for laboratories involved in bioinorganic and medicinal inorganic chemistry.