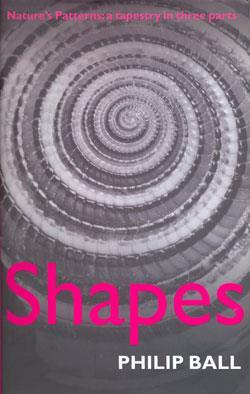 Shapes  is the firstof a series of three books (the other two volumes, Flow  and  Branches  , will be published later this year) which explore the relationships between nature, mathematics, physics and chemistry. As such, it joins a long line of books which I have read and enjoyed in this area. Starting from D’Arcy Thompson’s  On growth of form  (1917, reprinted 1992), through Peter Stevens’  Patterns in Nature  (1974) to Ball’s own previous book  The Self-made tapestry, with a few related offerings by Ian Stewart and others.

Ball, whose writings are familiar to  Chemistry World  readers through his regular Crucible page, tackles his subject with enthusiasm and insight: exploring form and pattern in nature, including cellular and bubble patterns and packings; chemical waves, oscillations and spirals; spots, stripes and other body patterns; patterning in populations and ecosystems; plant phyllotaxis; and embryonic morphogenesis and patterning genes.

Ball brings more chemistry to bear on these subjects than previous authors on these topics, exploring possible links between biomolecular structure and biological form, but he continually relates the chemistry to other sciences. He concludes with a discussion of the various theories about the possible existence of an organising force behind the patterning in nature. In the end the reader can only marvel at the variety of ways that nature exploits pattern formation.

I look forward to reading the other two books in this trilogy when they are published.

One criticism is that a book which purports to explore natural forms would be greatly enhanced by liberal use of colour photographs and illustrations, instead of the token colour plates in the centre of the book. Without colour the book does not have the ’wow factor’ that the text deserves, and is less attractive to the general reader.