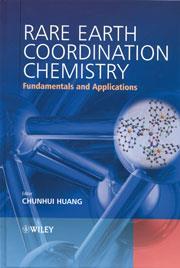 The importance of the rare earth metals to modern technology, and the key role of China as the world’s major supplier, have been recognized to such an extent that an episode of Radio 4’s Costing the Earth was devoted to the topic in May 2010. Not surprisingly, China has a thriving rare earth research community, and this book is an updated and extended version of  Coordination Chemistry of Rare Earths  published in Chinese in 1997.

The first half of the book deals with various classes of rare earth complexes:

-diketonates, carboxylates, complexes with N-donor ligands, polyoxometallates, alkoxides, endohedral fullerenes, and organometallics; the second half deals with actual and potential applications: magnetic molecular materials, MRI contrast agents, electroluminescence, near IR luminescence, and applications as biosensors and bioimaging probes. Each chapter has an extensive bibliography, and many of the references are to very recent work.

Some of the chapters on coordination chemistry are presented as catalogues of facts rather than as critical appraisals of the field (this is particularly true of the chapter on polyoxometallates), and the choice of content is sometimes rather arbitrary. For example the chapter on alkoxides fails to mention the hugely important and successful ’Shibasaki’ tris-binaphtholate catalysts, but does describe a much less general example containing a linked binaphtholate ligand. There are some irritating errors such as the interchangeable use of the terms ’rare earth carboxylic acid complexes’ and ’rare earth carboxylates’, and the use of the term ’amide type ligand’ in the context of complexes with neutral amines.

Unfortunately the weakest chapter is the introduction, which is presented in a rather poorly organised and dated style, with no obvious attempt to link its content to that of subsequent chapters. Many of the references in this chapter are to Chinese publications, which will not be accessible to most readers.

Overall, this is a book with some excellent and topical content, particularly in the chapters on applications, which a reader who has some basic knowledge of rare earth chemistry will enjoy and find useful.