Why are orangutans orange?

Why are orangutans orange? 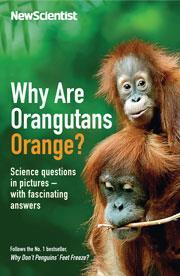 This new book in the Does anything eat wasps? series follows the usual pattern for these now familiar volumes, except that it is the first to come resplendent with full colour photographs. The book showcases questions submitted by readers of the Last word column in New Scientist magazine which are then answered by other learned readers. The book collects together the best and most interesting examples, together with explanatory photographs.

Four volumes of questions have now been published, this being the fifth. Although the books draw on their reader’s expertise in a way which few other resources can imitate, one wonders how many volumes can be produced before the model begins to feel tired and lose appeal.

However, the inclusion of photos in this volume was sufficient to revitalise my interest in the books. Almost without fail, the images pose intriguing questions which draw the reader in and manage to make the issue relevant and clear to the reader. The photo of an ancient-looking shrimp species found by a reader on Ayers rock in Australia was a particularly good example. The photo immediately allowes the reader a glimpse into that intriguing find and sucks them into the story.

This book will be an interesting read for anyone with even a speck of curiosity about the natural world. The photos make it probably the best book in the series so far.