The daughter of invention

Bad ideas? An arresting history of our inventions

Bad ideas? An arresting history of our inventions 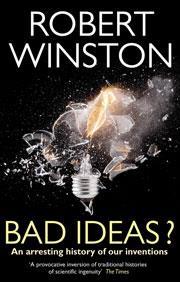 I wasn’t entirely sure what to expect with this book. After all, with as diverse a subject as invention, would there be any focus? This point is also raised by the author in the opening passages, as he himself had encountered difficulty in narrowing the subject matter. On reading the introduction, my other concern was that it would be a negative take on invention; an excuse to lament technology and its misuse. Happily, the book is finely focused and fascinating. The opinions both for and against the scientific advances are discussed logically and well argued.

The book covers several core topics, including language (both written and spoken), communications and the media, farming and food technology, commodities and medicine. Each topic is similarly structured, beginning with an insightful history, an introduction to key people, plus anecdotes and evidence. The book then brings the reader up to the present day and provides an informed opinion.

Ultimately, what is a good idea or not largely comes down to public perception of both the idea and its evolution. The last chapter deals eloquently with the often uneasy relationship between scientists and the public, the role of the media, and how all parties could possibly come to view each other with less suspicion for the greater good.

Written almost in the voice with which Robert Winston narrates his TV programmes, it is easy to spend a lot of time really thinking about the concepts presented.   The book is thought-provoking and should prove enjoyable and informative, both for the scientist (of any discipline) and the lay reader.