Garlic and other alliums. The lore and the science

This is a fascinating book written by an authority on the chemistry of the edible alliums, which include garlic, onions, leeks and chives. True to its subtitle, the lore and the science , the book contains much more than just the sulfur chemistry of garlic and its relatives. 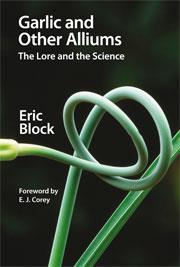 The first two chapters are devoted to a historical introduction to the botany of the edible alliums and to their role in literature and the arts.

The next two chapters ’unpeel’ the chemistry of onions, garlic and other edible alliums. This is an area to which the author has made many contributions over the last 40 years. The title of the first of these chapters Chemistry 101 indicates that the chemistry is presented at a level which is easy to understand. Together with the chapter entitled  Chemistry in the salad bowl  there is much on the sulfur chemistry of the pungent and lachrymatory compounds in alliums. This complex story of the reactions of allyl sulfides and sulfoxides, particularly allicin, is told from first hand experience and given a historical perspective. The title of one section  Allicin in Wonderland   epitomises the complexity of the topic.

The final two chapters deal with alliums in folk medicine and in the garden, including their use in protecting other plants from predatory attack. Much has been written concerning the health benefits of garlic and onions. Here the evidence is evaluated in a critical and balanced manner. The quotation in the heading of one section that ’the plural of anecdote is not data’ summarises the author’s approach.

The book concludes with a very extensive bibliography, tables of the constituents of alliums and their biological activity and rare historical drawings of alliums.

The book is well written and up-to-date, including references to papers published in 2008 and 2009. The experimental evidence supporting the structural conclusions is discussed in detail and the underlying physical principles of some of the instrumental methods are described in an approachable manner.

I can thoroughly recommend this book not just to natural product chemists but also to all those who have grown these plants in the garden or enjoyed eating them. It contains many anecdotes and quotations to enliven a chemist’s dinner party.